The song for the Tim Burton movie "sounds nothing like Blink or Fall Out Boy," says Wentz. 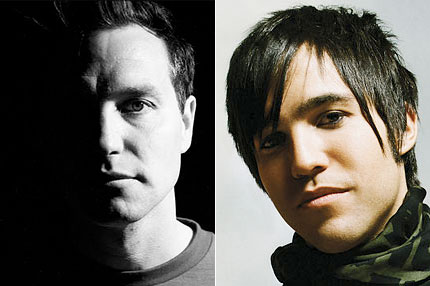 Pop-punk’s two biggest stars — Mark Hoppus and Pete Wentz — are taking a trip down the rabbit hole… together.

The Fall Out Boy and Blink-182 bassists have recorded a new song for the soundtrack to Tim Burton’s psychedelic remake of Alice in Wonderland (in theatres March 5) and according to Wentz, the new song sounds different than anything either of them have ever done before!

In an email to MTV, Wentz described the song as “nothing like Blink or Fall Out Boy.” “Mark understands songwriting on a completely different level,” he wrote. “It’s awesome to have a chance to sit in a room with him and watch him work out a melody.”

Wentz added that the duo — who collaborated on the Octodrive last year — might record “a few more” songs for the film, depending on when Hoppus hits the studio with the reunited Blink-182.

But that doesn’t mean they are forming a new supergroup, like Wentz’s Fall Out Boy bandmate Andy Hurley and his side-projects the Damned Things and Burning Empires.

“It’s just for fun,” Wentz wrote of the collaboration with Hoppus. “It’s not a band or even a project at this state. I think between me getting Starbuck’s on TMZ and him gearing up for a summer of Blink, we have a lot on our hands.”

A release date or tracklist for the Alice in Wonderland soundtrack have yet-to-be revealed, but are expected in the coming weeks.