PLUS: Details on the Aussie hard rockers' soundtrack for the much-anticipated sequel starring Robert Downey, Jr. 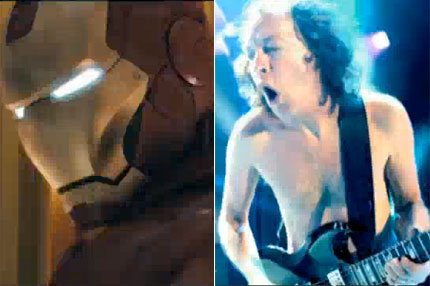 While Black Sabbath was an obvious choice for the trailers and closing credits of Robert Downey, Jr.’s 2008 blockbuster Iron Man — you know, because one of their biggest hits is “Iron Man” — Australian hard rockers AC/DC are the ONLY act on the soundtrack to Iron Man 2, contributing 15 songs from their catalog.

An Iron Man 2-themed video for their Back In Black track “Shoot to Thrill” was released today — watch it below! It features live footage from a recent AC/DC gig in Argentina (at the tail end of the tour they kicked off last fall),and some of the first scenes from the movie.

What’s noteworthy about the Iron Man 2 soundtrack is that it’s about the closest the band has come to releasing a greatest hits album, which they’ve notoriously avoided, instead hoping to encourage fans to buy entire albums from their catalog. Aside from “You Shook Me All Night Long” and “Dirty Deeds Done Dirt Cheap,” the Iron Man 2 album is a pretty solid composite of the band’s best.

Advance orders for AC/DC’s Iron Man 2 soundtrack can be made starting today via Walmart, with whom the band signed an exclusive deal to sell their 2008 album, Black Ice. The soundtrack’s official on-sale date is April 19, a few weeks before the movie’s May 7 release date.

AC/DC, Iron Man 2 tracklisting:
Shoot to Thrill
Rock’N’Roll Damnation
Guns for Hire
Cold Hearted Man
Back in Black
Thunderstruck
If You Want Blood (You’ve Got It)
Evil Walks
T.N.T.
Hell Ain’t a Bad Place to Be
Have a Drink on Me
The Razor’s Edge
Let There Be Rock
War Machine
Highway to Hell