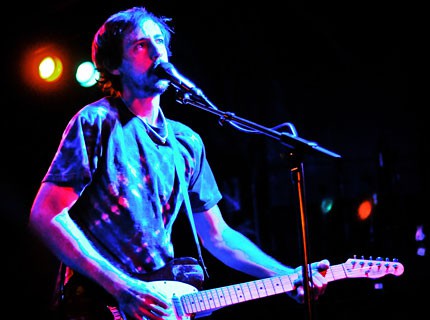 Baltimore’s Ottobar is a cozy space, its walls lacquered with black paint, yellowing punk posters, water stains, and rock history — the last of which made it an especially fitting venue for the barely-hyped solo debut of Maryland lad-done-good Josh Dibb, better known as Deacon, a founding member of Animal Collective.

Deacon — who hasn’t been an active member of the band since 2006 — used the New Year’s Day gig as a test run for songs he’s been preparing for a limited edition CD release and a trip to Mali, both of which are part of his efforts to help abolish slavery in the African nation.

So while Animal Collective’s 2009 opus, Merriweather Post Pavilion — SPIN’s Album of the Year — was a career-making effort, Deacon’s solo set Friday night offered a glimpse into an alternate reality where AC hadn’t blown up into the stratosphere: Only a few college-aged Animal Collective fans populated a room that also included Baltimore experimental music luminaries like Dan Deacon to Nautical Almanac noisenik Twig Harper.

A skinny, plain-ish looking fellow sporting a tie-dye shirt and a de rigueur Brooklyn moustache, Deacon played by himself for a little less than half an hour, and looked a bit uncomfortable. Switching back and forth between a microphone and a small table of electronics, his material mixed rock guitar — at turns comfortably melodic, angrily dissonant, or prettily swelling — with canned beats and uneasy ebbs of electronic ambience.

But five songs in, Deacon took an exciting turn into heavier, darker tones: The beats thumped deeply, while his pick ground into the strings, making a discordant din that infiltrated the background ambience like gravel spread into sand. Vocally, he eschewed friendlier vocal effects — which, frankly, made him sound awfully dude-from-Animal Collective — for a Morrissey-like croon. Like Bradford Cox’s Deerhunter, Deacon’s music feels heavily Xanaxed, and his lyrics veer in and out of intelligibility.

The next audience to experience Deacon’s solo work will be a Malian crowd later this week. The rocker departed for Mali on January 2 — and is bringing along $25,000 in funds raised by Animal Collective fans and donated by the band’s former label, Paw Tracks. Those who donated $50 or more will receive a CD of music recorded by Deacon during his trip. To read more about Deacon’s journey, and his upcoming performance at that country’s Festival in the Desert later this week, click here.

Michael Byrne
Tags: animal collective, deacon, We Were There