Ex-Zero 7 songstress steps into a DIY video game in her "You've Changed" clip. 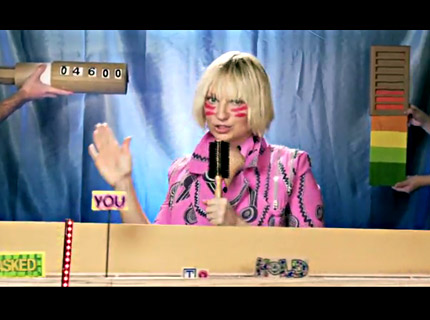 Sia doesn’t strike us as a Wii or Playstation fanatic, but that doesn’t mean she isn’t game for, well, a video game. In her new clip for “You’ve Changed,” the Aussie songstress steps into the game, transforming her lyrics into an interactive, DIY-style challenge. Listen up, controller jockeys: this is the real RPG. Watch below.

With cut-out paper signs that act as the “new,” “settings,” and “start” buttons, a player (read: the viewer) watches on as numerous people are presented on-screen, sitting in front of what looks like the cheesy background from your high school yearbook photo. Sia pops up in various outfits, singing to the disco-pop tune as paper cut-outs of the lyrics fly by.

The song, off her fourth studio album We Are Born (out in April 2010), is all about changing “for the better,” sings Sia, and ultimately, each character in the video does just that. It’s a catchy story of self transformation and identity, told in one of the most creative videos we’ve seen all year.

Can’t get enough Sia? Watch her video for “Soon We’ll Be Found,” a track off her 2008 album Some People Have Real Problems, here. And for more on Sia’s work with pop star Christina Aguilera, click here.