Story of the Year: Health Care

Boo, socialism! Boo, death panels! The most polarizing political issue of 2009, health care reform has angered and confused pretty much everyone. But perhaps no one is feeling the hurt more than struggling musicians. 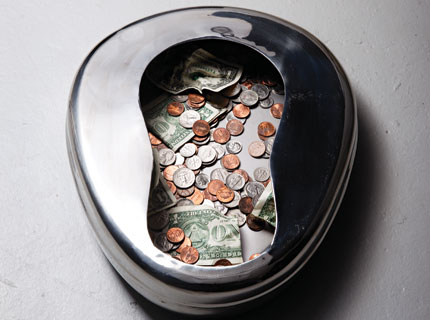 The last thing Ian McDougall remembers is riding his bike home around 3 a.m., enjoying a warm mid-October night in Austin, Texas. The Riverboat Gamblers guitarist had been hanging out with his friends in Valient Thorr, who had played a show earlier that night.

“I wake up in the ambulance and they are cutting all my clothes off,” McDougall recalls. “I’m staring up at all these people who are moving my body around and putting things in me. I had no idea what happened.”

A pickup truck going 45 mph had hit McDougall, who smacked the vehicle’s windshield with his head, then flew 100 feet through the air before landing hard on the ground, breaking an ankle, wrist, and hip socket, as well as fracturing his skull and face. “At one point my neck and head became detached for a second, but they snapped back into place.”

A few days after being released from a weeklong hospital stay, he’s still in considerable pain. The doctors expect him to eventually make a full recovery, but he’s just beginning to grasp a new hurt: how to pay for his medical treatment. McDougall has no health insurance.

“I could never really afford it,” says McDougall, who makes between $10,000 and $12,000 a year. “And I never really had time to work at a job long enough that would provide health insurance.”

Online donations have covered some medical costs. Others may be paid for by Health Alliance for Austin Musicians, a nonprofit group that serves low-income musicians in the area. Two similarly minded national nonprofits, Sweet Relief and the Grammy Foundation’s MusiCares, have indicated a willingness to help as well, but the likelihood that a substantial financial burden will fall on McDougall remains.

“I haven’t received any bills yet-actually, I got one from the ambulance ride that was $1,200-but this has been the first week that I’ve been all there upstairs and dealing with that stuff,” he says. “Hopefully, this doesn’t end up ruining me even more.”

The health care crisis became a constant front-page story in 2009 largely thanks to those who seem most resistant to dealing with it. The wonderfully absurd spectacle of enraged old white people, some armed, shouting down their elected representatives at “town hall meetings,” assailing a proposed government-run health care plan (a.k.a. “the public option”) as a stalking horse for President Obama’s Socialist Workers’ state, and insisting the proposed reforms would lead to grandmas being euthanized by government death panels, was catnip to cable news outlets and talk-radio/blogosphere screaming heads. It brought health care reform from the level of sober, substantive policy debate to full-on WWE SmackDown in a way impassioned activists droning on about the 46 million people in America who are uninsured or the 45,000 who die each year as a result could not.

Within the music industry, the debate is being watched closely. The lack of access to affordable health insurance has been a persistent problem among artists for decades. According to a Future of Music Coalition poll, 44 percent of musicians go without insurance, almost three times the national average. It’s not that musicians are a singled-out minority, it’s just that so many fall into the cracks-chasms, really-in this country’s health care system. According to a 2008 government census, nearly 60 percent of people in this country are insured through an employer; most full-time musicians are essentially self-employed. More than 18 million of the uninsured are between the ages of 18 and 34; so are most aspiring rockers. The vast majority of the uninsured make less than $75,000 a year; ditto for all but the most successful artists. Then there are plenty of artists among the 12.6 million people in this country who are denied coverage based on a preexisting condition.

“It’s ridiculous,” says Bob Andrews, whose Undertow management company represents the Bottle Rockets, Centro-matic, David Bazan, and others. “I don’t know any indie musicians who are at the level of scraping by, making a living, who actually have real health insurance.”

In other industries, unions have often stepped into this breach, organizing contract workers and the self-employed, enabling them to obtain group policies. But the main musicians’ union, the American Federation of Musicians, doesn’t offer group insurance. Another, the American Federation of Television and Radio Artists (AFTRA), has a deal with the major labels to offer group health plans to roster artists. But somewhat confusingly, only vocalists can be covered by AFTRA (though they need not be lead vocalists).

According to Rick Canny of Sanctuary Artist Management, which represents Velvet Revolver, Fleetwood Mac, and others, this requirement is often fudged. “The hidden secret in the music business is whenever you get a chance to do a TV show, everybody sings, even if they don’t usually, for that reason,” he says. “Everybody tries to get a vocal performance on a record.”

Randy Himes, AFTRA’s assistant national executive director for sound recordings, estimates more than 2,000 major-label artists are insured through AFTRA, a not insignificant number, but still a drop in the bucket considering the tens of thousands who try to make a living playing music. (AFTRA recently agreed to cover independent artists, though the eligibility requirements are onerous and labyrinthine: So far, only 12 are enrolled.)

“I’ve had many discussions with musicians about insurance,” says X vocalist Exene Cervenka, who was recently diagnosed with multiple sclerosis and has struggled for years to stay insured. “Not one I’ve met in my life ever got insurance from AFTRA or another musicians’ union.”

Part of the problem, Himes says, is people aren’t aware of AFTRA’s offerings. “At [a major-label] contract signing, the artist is supposed to be advised that they are guaranteed health insurance if they want it,” he says. “That isn’t being done. The word isn’t getting out.”

Another problem, according to Bob McLynn, who manages, among others, Fall Out Boy, Gym Class Heroes, and Cobra Starship, is that major labels, already pinched for money these days, are increasingly loath to make their “employer contribution” to the AFTRA insurance. “Back in the day, that was a given,” he says. “You’re on a major and your AFTRA’s covered, at least if you do vocals. These days, we have to fight for that in a lot of our deals.”

Read more on health care reform and the music industry in the Jan./Feb. 2009 issue of SPIN, on newsstands now!