She & Him Finish Second Album

Zooey Deschanel and M. Ward talk about Volume Two, due this Spring. 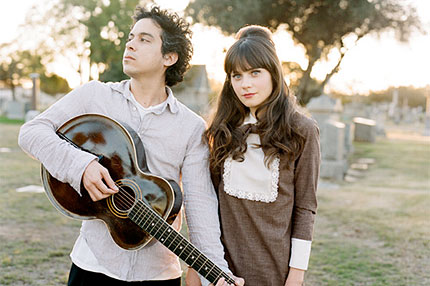 One of 2008’s most unlikely breakthrough acts will return with a new album in 2010. She & Him — the duo of actress-turned-singer Zooey Deschanel and guitar whiz M. Ward — have wrapped sessions for Volume Two, the rather logically titled follow-up to the duo’s solid debut, Volume One.

The most special thing about the Spring 2010 release, according to Ward, is the growth in Deschanel’s songwriting. “What I wanted to do was to show more dimensions to Zooey’s writing, and I’m excited for people to hear the record because I think it’s going to continue to show the strength of her writing,” Ward tells Paste.

Ward characterized the album as both darker and brighter than Volume One: “I think that people are going to hear more contrasts, which is always something that I shoot for in the studio.”

Deschanel added: “We had a bit more time and resources so wewere able to work a little deeper.”

Both “She” and “Him” have been busy since touring concluded for Volume One. Deschanel wed Death Cab for Cutie frontman Ben Gibbard in September and starred in the summer’s offbeat indie hit (500) Days of Summer. She recently wrapped shooting for Your Highness, a medieval-era comedy helmed by Pineapple Express director David Gordon Green, co-starring Natalie Portman, James Franco, and Danny McBride.

Ward dropped another solo album in February, the noteworthy Hold Time, which featured a guest appearance by Deschanel — you can download it here. He also joined My Morning Jacket’s Jim James, Conor Oberst, and Mike Mogis as Monsters of Folk.