On the Scene: Miami 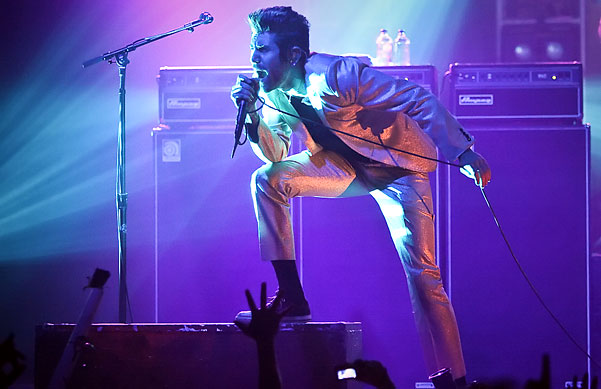 Touring behind their new album, Crash Love, frontman Davey Havok and the rest of AFI impressed SPIN shooter Ian Witlen, who took all the photographs in this gallery, with their maturation as a band. "I hadn't seen them play in a long, long time," Witlen says. "Their music has developed so much. It's not just screaming anymore. I think that's why they've gotten so much bigger in the last few years."

Touring behind their new album, Crash Love, frontman Davey Havok and the rest of AFI impressed SPIN shooter Ian Witlen, who took all the photographs in this gallery, with their maturation as a band. "I hadn't seen them play in a long, long time," Witlen says. "Their music has developed so much. It's not just screaming anymore. I think that's why they've gotten so much bigger in the last few years." 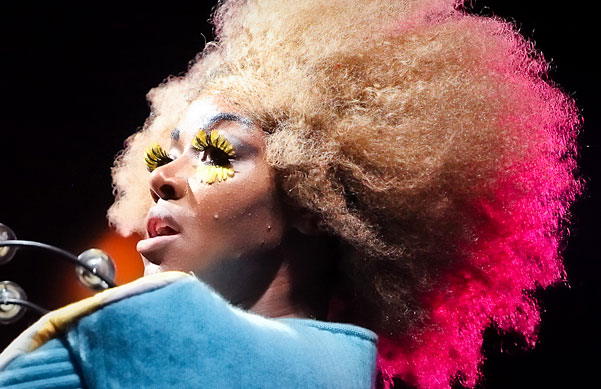 Playing as part of the Art Loves Music festival, up-and-coming British R&B songstress Ebony Bones put on an impressively athletic performance. "She has so much energy," raves Witlen. "I don’t how she has the air in her lungs to be able to sing after she's been climbing on the stage railings and jumping off the drum riser. She's an incredible performer." 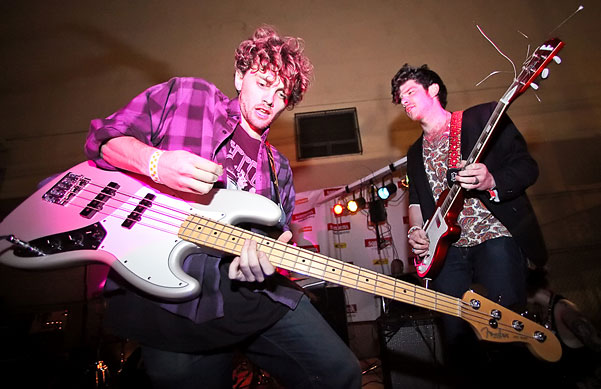 Brooklyn synth-rockers Chairlift had to deal with a boatload of technical difficulties at this barebones show. "The whole thing was DIY," explains Witlen. "The power was coming from gas-powered generators, which kept cutting out. At one point, [singer Caroline Polachek] screamed, 'What the fuck is going on?!'" Despite the problems, the band "still put on an amazing show." 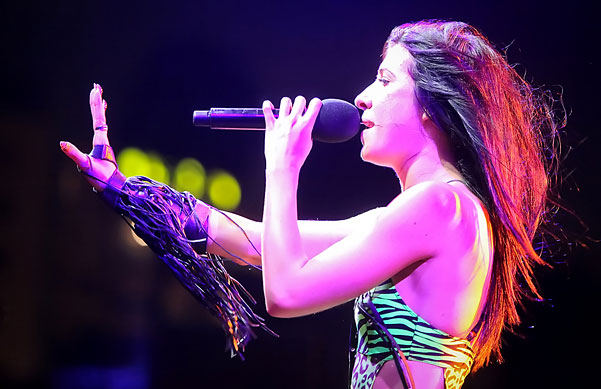 Lascivious Philadelphia-based rapper Amanda Blank was a bit of a sacrificial lamb time-wise. "When she come on around 9 p.m. it was to a pretty sparse crowd," recalls Witlen. "That's sort of what happens in Miami. Things get going pretty late." Those who were there early, though, may have been in for a surprise. "You don't expect someone dressed like they're in the Yeah Yeah Yeahs to do full-on rapping like she does." 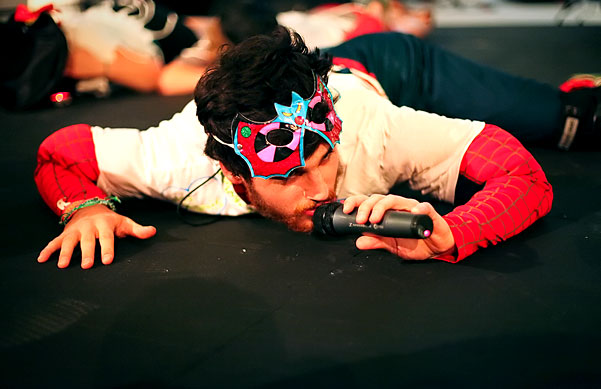 Experimental dance-rockers Terror Pigeon Dance Revolt! may have benefited from some liquid help during their set. "It's pretty weird music," says Witlen. "It's all played by backing tracks and then eight and nine people on stage sing and dance. I think the fact there was an open bar might have been part of the reason the crowd got so into it!" 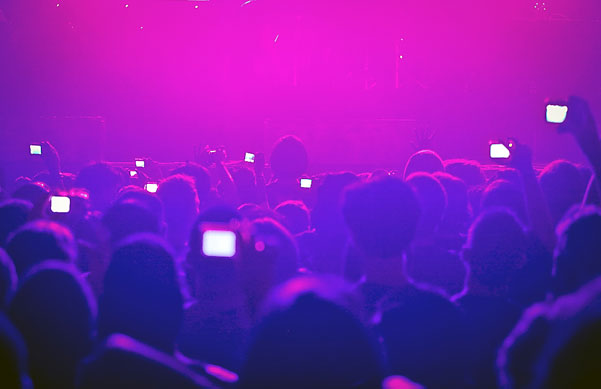 "This photo was taken right before the band went on stage," explains Witlen. "The house lights went off, then the band started playing bass and guitar backstage, and then they eventually walked on stage playing their instruments. It was really cool to shoot." Apparently, he's not the only one who thought so. 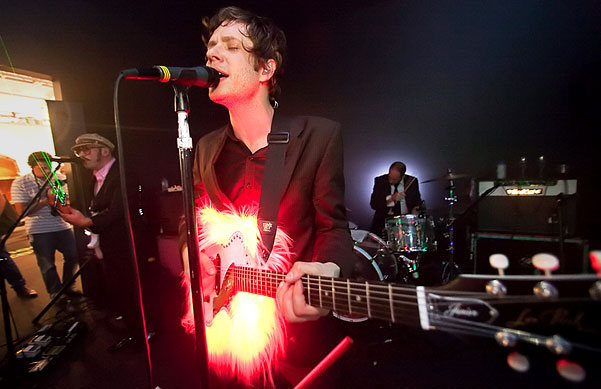 Playing as part of an Art Basel-affiliated show, Chicago alt-rockers OK Go, whose third album, Of the Blue Colour of the Sky is due January 12, sported some serious equipment. "Each guitar was custom made with lasers built into the necks," says Witlen. "So when the guys in the band moved, the lasers would react. When the band wasn't playing, the instruments were on display for people to come look at." 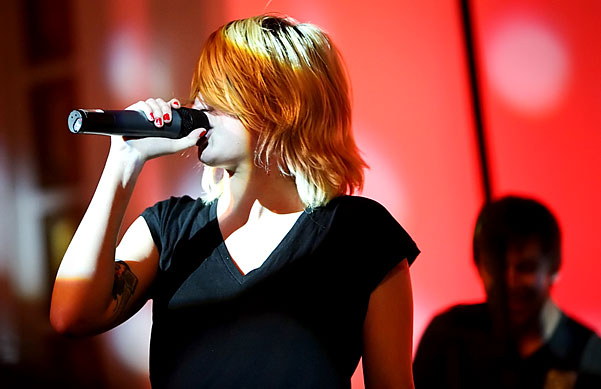 Punk-rock spitfire Jemina Pearl shared a bill at this Diesel-sponsored show with Kid Cudi and SantiGold. "It's easy to be skeptical when a clothing company sponsors a show," says Witlen, "but the fact that Jemina was playing in the same place as a rapper like Kid Cudi and someone like SantiGold made it seem like there was actually some thought about getting interesting musicians together." As for Pearl, "she was great." 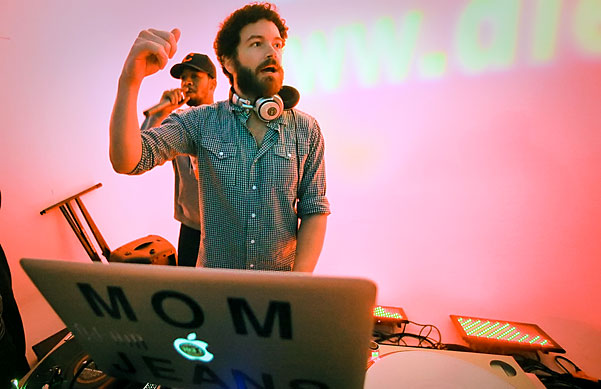 DJ Mom Jeans, the nom-de-DJ of actor Danny Masterson, fell victim to some bad timing. "He started his set right after SantiGold had performed," says Witlen. "It was probably 1:30 in the morning by then. People had already started leaving because they thought the show was over." Thank goodness Kid Cudi was around. "When he came out to rap with Mom Jeans, everyone started to come back in." 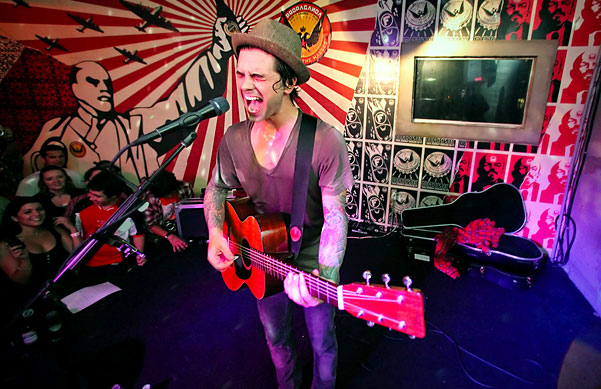 Hometown boy Chris Carrabba of Dashboard Confessional took Witlen on atrip down memory lane at this secret show. "I used to see him play tinyclubs like this all the time back when I was in high school. So to himsee in that kind of intimate venue again was really special."
The show was announced only on the Dashboard MySpace and Twitter a couple hours before he went on-stage. Despite that, "there were still hundreds of people waiting in line trying to get in. It was madness. Look at how small the stage was!" Dashboard's tour runsthrough April 13, 2010. 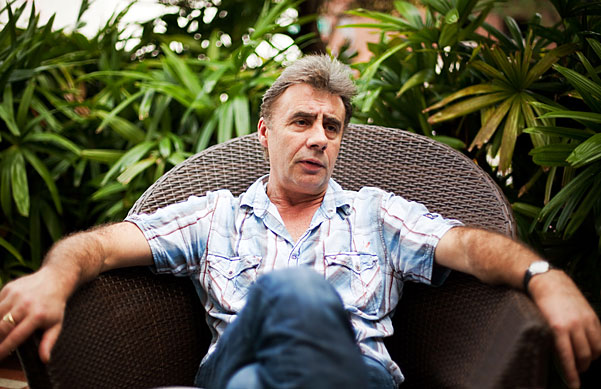 Seen here after a round of newspaper interviews to hype a solo acoustic performance, original Sex Pistols bassist Glen Matlock offered a surprising tidbit to our photographer. "He said he'd never been to Florida before," says Witlen. Despite his prior aversion to the Sunshine State -- and "looking like a retiree -- Matlock, "was a really cool guy. He had great things to say about [his Sex Pistols replacement] Sid Vicious." 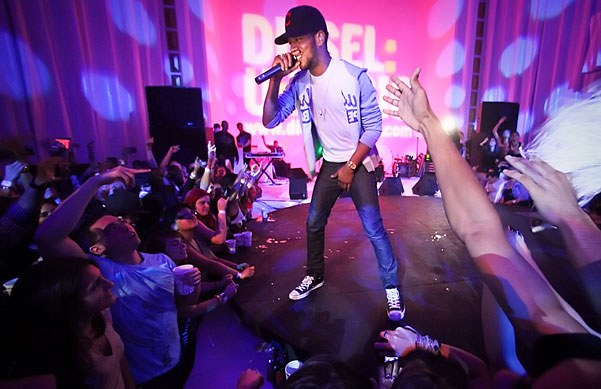 Following Jemina Pearl, Cleveland rap star Kid Cudi made sure to keep the energy going. "There was no lag at all from set-to-set," says Witlen. "Cudi came out and everyone was chanting his name -- the security guards had to keep people from jumping off the stage." 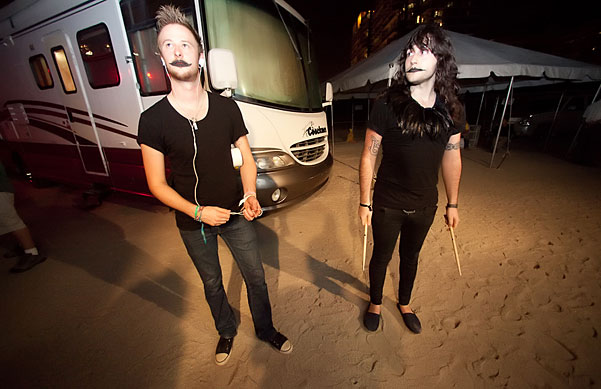 "The backstage area at this show was just a bunch of RVs set up in sort of a circle," explains Witlen. "I saw the drummers from Ebony Bones' band jhanging out and went over to say hi. It was kind of surreal to have a normal conversation with people who looked like that!" 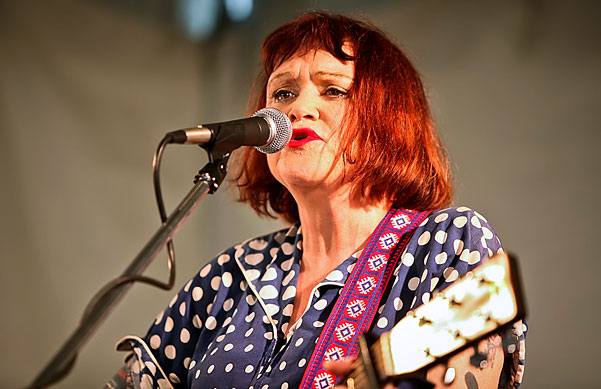 Former X singer Exene Cervenka was playing as, you guessed it, part of an Art Basel-related show. "It was really chill," says Witlen. "The performance was outside and she did a lot of spoken-word stuff. She played a lot of acoustic guitar. It was funny to see all these tattooed punk fans hanging out on hammocks watching her play." 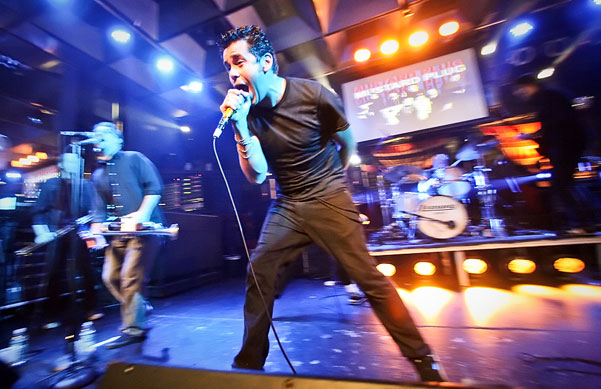 Veteran Michigan ska band Mustard Plug, "were extremely energetic," says Witlen. "The guitarist was leaping off the drum platform, the horn section was dancing around -- the whole thing was crazy!"