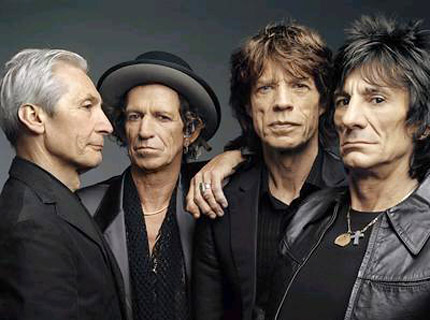 The rumors are starting up again. According to one British report, the Rolling Stones are searching for a new guitarist to replace Ronnie Wood, whose drinking and alleged assault on his 21-year-old ex-girlfriend Ekaterina Ivanova have been wearing on the band as they consider a 2010 tour.

According to the Daily Mail, Mick Jagger is seeking a new guitarist to take Wood’s place. Jagger reportedly thinks that Wood has become unreliable since he left Jo, his wife of 23 years, for Ivanova. Jo apparently acted as a conduit between Wood and the rest of the band.

“It’s one thing to say ‘Let’s have the Stones frightening the grannies, let’s all be debauched and wild,’ but it’s just not acceptable to have one seen choking his girlfriend,” a “friend” of the band told the Daily Mail. “There are two things you can’t be seen to do, which is hit women and get involved with under-age girls. Thanks to Ronnie and Bill Wyman [who seduced and went on to marry 13-year-old Mandy Smith], Mick has had a full house now.”

The 62-year-old guitarist’s debauched lifestyle could also make it difficult for the band to secure insurance for a 2010 trek, making him a financial gamble.