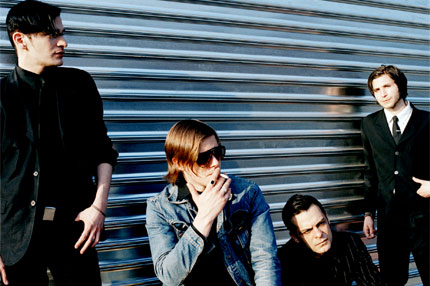 Interpol has a new sound — and it seems fitting for the classy suits that the New York City quartet are known for wearing.

The former SPIN cover boys are working on their follow up to 2007’s SPIN-approved Our Love To Admire, and in a recent interview with BBC, frontman Paul Banks said fans can expect an “elegant, orchestral quality” to the new songs.

What’s behind this change in direction? Bassist Carlos D’s work scoring his debut film, My Friends Told Me About You.

“Carlos has gone to total new levels of crazy sophisticated orchestration,” said Banks. “There’s some really classical stuff going on. [He] brings that elegant, orchestral quality and he’s gone even further with that.” ?

Adds Banks of the new material: “It’s very atmospheric but it sounds really different in my mind. ??What we’ve worked on is a real step forward and just very different and very relaxed in what we’re doing, but it certainly doesn’t sound like anything we’ve ever done before, to me.”

Last spring, Banks called the sound “vital…. It’s as though we’ve hit upon a balance between our urgency and our calm….And true to our better work, this is music that unravels over time.”