After My Chemical Romance’s grueling two-year tour in support of their hit third album, The Black Parade, the quintet put the band on hiatus and retreated to their personal lives to recover. Frontman Gerard Way married and had his first child, daughter Bandit Lee.

It was the chance to cover Bob Dylan’s “Desolation Row” for the 2009 blockbuster/graphic novel adaptation of Watchmen that pried Way and his bandmates out of their houses, and found them beginning to formulate their next move. “It was a good test to play around with where we might potentially go,” Way tells SPIN.com. “We started with the Sex Pistols and then decided to go back further, before punk. What was before punk that was punk? So there’s the MC5 and the Stooges, and that Detroit sound.”

And those are just a few of the touchstone bands whose influences surface on MCR’s as-yet-untitled fourth album, due in the Spring. Hints of Judas Priest, Def Leppard, and the Hives permeate seven new songs previewed for SPIN.com: “Death Before Disco,” “Save Yourself,” “Trans Am,” “Only Hope,” “Light Behind Your Eyes,” “Black Dragon Fighting Society,” and “L.A. Heavy.”

And while Gerard is still writing songs to stir the jilted, with his typically snide worldview intact, these tunes reveal a band having a damn good time. 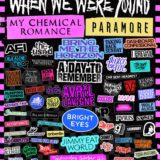 We caught up with Way to talk about the album, its roots in the band’s home state of New Jersey — and even a certain MTV reality show that’s filmed there.

How did you manage to make this record while being a brand new dad?
The record was more challenging than the baby, and the baby was really challenging. I was pretty worn out. [My wife] Lindsey and I had the baby, and then two weeks after that I was in the studio. I didn’t shave for weeks, looked horrible, and ended up getting all these dreadlocks in my hair. I was never showering. I would show up in a t-shirt covered in baby puke — you can pretty much picture the glamorous nature of that. And so we would work every day, and as soon as we were done I would rush right home and help Lindsey with the baby.

It’s nice to be able to run home and see the kid before it gets too late everyday.
Yeah, absolutely. It made the recording process take a little bit longer, but it made the process more enjoyable. I don’t think there was a single night where I was in the studio past like 10 or 11 — I genuinely wanted to get home. We also realized that we don’t have to work until 5 A.M. to make a great record. We just needed to stretch it out over the course of four months instead of two.

We’ve heard seven songs from the album, and we’ve been told there was there was a New Jersey-ish vibe to your writing process — even though you were writing and recording in L.A.
It’s funny. I played a song for my friend [and legendary comic book author] Grant Morrison, and he immediately said, “Oh, this sounds like California.” But aesthetically or fictionally, the album has these feelings of being like a 15-year-old kid at the Jersey Shore, trying to win a Motley Crue mirror or an Iron Maiden hat, from that era when heavy metal was yet to become hair rock.

It’s also about the Boss — he was my first show — but the Boss before the really big hits. That notion that if you’re from Jersey, you want to get the hell out of it. I love Jersey, but that was my goal. And to me, the music of Springsteen was always about that. It’s just about of getting up and blowing out of town.

The last album was so overtly conceptual, but this one appears to have more of a sonic thread than a narrative one.
The album has many themes. That a band and an audience can be immortal through rock’n’roll, even if just for one night. The power of believing in something. Being a survivor, running away in a positive way, leaving home in order to come back. Having a number of themes actually made it harder to piece the record together. Black Parade was very simple — we have an intro, we have a midpoint, and we have an outro. We’d been making concept albums since our first one, so to do this, to make a truly great album that doesn’t have the crutch of a narrative, that was so hard. And everything is more direct. If Black Parade was about the sweeping gesture, this is about the bold statement.

Let’s talk about some of those new songs. “Death Before Disco” has a Hives-y take on proto-punk.
We actually got to play that song for Wayne Kramer [of the MC5] in our pre-production, which was awesome. He wanted to come by and visit us, and we said, “Hey, can we play you this song? I lyric-check you guys in it. You know your band is a huge inspiration for our sound on this record.” That song is truly about the power of working class rock’n’roll versus the power of fame. It’s working class rock versus Chanel fucking handbags and red carpets and all that bullshit.

All of the bands you’re mentioning as influences here are working class rock’n’roll bands. After last record and huge tours and everything, it sounds like that’s an ethos you guys are really craving.
Absolutely. That was where we started, and that’s where we meandered for quite a while. It was funny, when we were a lower working class kid rock band, like we were trying to pretend to be a larger than life rock band. We were playing basements and I was talking about our jumbo jet, just because it was funny, and we obviously didn’t have one — we couldn’t even wash our clothes! Now, I think it’s kind of reversed. Now we are constantly jet-setting and it doesn’t really suit us, so we’re working hard to remember what it was like when we were a working class band.

“Trans Am” is another one that’s very much in that vein, just quick and dirty. And like any good Jersey song, there’s a girl named Jenny in it.
Of course! I think my Jenny is referring to the missing Jenny in the Killers song. I think, somehow, it was inspired by that — there’s definitely some connection.

Speaking of Jersey, have you watched Jersey Shore?
Oh my god, yeah. I don’t know if they leak this so people will watch, but I heard that people on the show were getting death threats, that people who produce the show were getting death threats, so I was like, “Alright, I gotta see this.” And I was actually kind of disappointed, because it’s really no different from any other show they have on the network. They could have shot this in Scottsdale, Arizona, and found the same type of people. It’s definitely not an accurate representation of New Jersey. But it’s definitely an accurate representation of a specific kind of people in New Jersey. I definitely did go to school with guys and girls like that.

Are you excited for Bandit’s first Christmas? Is is going to be a big deal?
It is a really big deal. It’s very exciting — even though no matter what we get her she’s not really going to realize what it is. We got her some fun outfits.

Like a reindeer or something of that nature?
Of course, yeah, absolutely! We still want to get a really lousy Sears picture of her so we’re gonna try to do that next week.

Where she’s looking off in the wrong direction?
Yeah, with a really shitty paper backdrop.