Kings of Leon: “Bigger Than We Wanted to Be”

Plus: Find out why Eddie Vedder predicted that Only by the Night would be a massive hit. 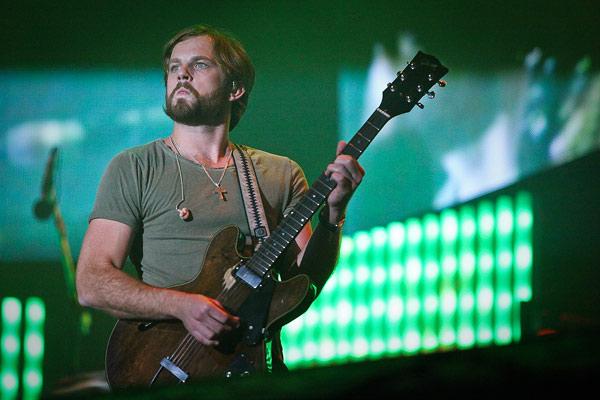 Wednesday night, Kings of Leon cemented their rock-god status, nabbing four Grammy nominations for “Use Somebody,” the chart-storming ballad off 2008’s Only by the Night, the record that finally rocketed the Tennessee quartet to international superstardom.

But while massive success often comes with accolades, it also has its pitfalls, and the constant exposure for Night hits like “Sex on Fire” and “Use Somebody” had Kings frontman Caleb Followill second-guessing his band’s path to the limelight.

“We definitely got bigger than we wanted to be,” Caleb tells SPIN. “You feel like you’ve done something wrong. That woman in mom jeans who’d never let me date her daughter? She likes my music. That’s fucking not cool. You almost start doing damage control: When people ask you to do stuff, you’re like, ‘No, because I can already tell this record is going to get to a level where people will fucking hate us.'”

While the band might not have anticipated reaching such commercial heights — their first three albums each moved a moderately successful 200,000 copies in the U.S., despite adoration by European audiences — one major rock icon knew it was about to happen.

“Ed [Vedder of Pearl Jam] actually called it immediately,” Followill says. “He was one of the first people to hear Only by the Night, and he said, ‘You’re about to ride a big wave.’ I don’t even think he liked the record. But he knew immediately that we were about to go through something big.”

Read more more of our interview with Caleb and his bandmates in SPIN’s January/February issue (on stands December 22). Until then, take a sneak peek at this shot from his SPIN photo shoot!