The Strokes crooner travels to a mountaintop pagoda in this otherworldly clip. 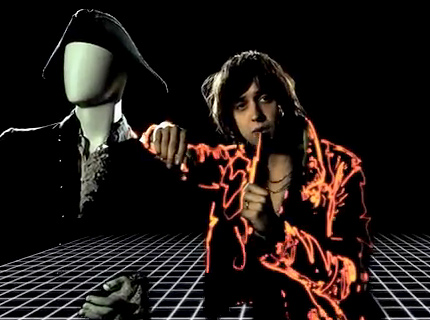 Dress the Strokes’ singer in a neon suit, have him act out thinly-veiled tributes to Mad Max and Blade Runner, and throw a mountaintop pagoda and some random guys in 17th-century sailor garb for good measure, and you get the otherworldly new video for “11th Dimension,” the lead single from Julian Casablancas’ solo debut. Watch below.

What we’ve learned: Mr. Casablancas is a cold war kid, raised in the good ol’ 1980s, and there’s a chance he took hallucinogenic drugs.

The downtown rocker gets poetic, too, scrawling verses like “Anger is weakness. Patience is strength” and “Every positive action has a reward. Bonus! There’s even a quasi-romantic twist with a foxy vixen in so much hairspray that you’ll smell it through your computer.