Get Your Xmas Photo with Eminem!

Detroit rapper dons a Santa costume and creeps-out small children -- all in the name of charity! 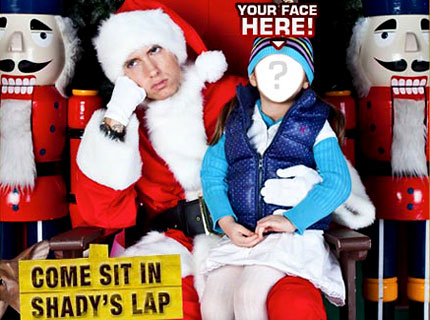 News flash, kiddies: Santa Claus is a sadistic, pill-popping rapper from America’s murder capital, Detroit, and he wants you to sit on his lap. Now. Say Cheese!

In an effort to spread a little holiday spirit, Eminem has gone all Kris Kringle, donning a red Santa suit, calling himself “Shady Claus,” and inviting fans to snap photos of themselves sitting on his lap. Naturally, it’s all digital — and it’s free: Head to Eminem’s website, upload a photo of your face, and — voila — you’re sitting on Mr. Mathers’ lap.

But there’s more: Fans can order a special photo, complete with Shady Claus’ signature. That’ll cost ya $24.95, all of which will go to The Marshall Mathers Foundation, Eminem’s charitable organization for the support and development of disadvantaged youth.

It’s been a busy year for Eminem — one filled with lots of presents for good little girls and boys. The MC, 37, dropped his long-awaited new album, Relapse, treated New Orleans fans to a rare live concert, collaborated with Lil Wayne, leaked a pair of new songs, and began work on a Relapse 2, expected to drop in 2010.