"We won't be returning for a third season," the New Zealand comedy duo says of their eponymous sitcom. 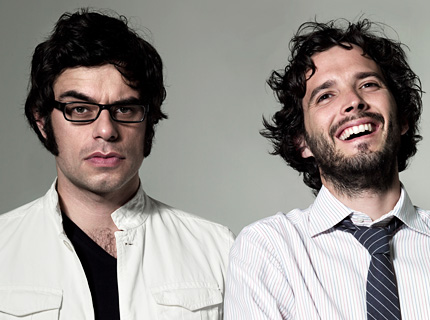 Expect fewer thinly-veiled sex jokes, hilarious folk songs, and semi-creepy super fans on HBO in 2010: Flight of the Conchords has officially been canceled.

A statement posted today to the New Zealand duo’s website confirmed long-floating rumors that jokesters Jemaine Clement and Bret McKenzie will not be returning for a third season of their 10-time Emmy-nominated series.

“We’ve noticed the less we say about the future of the show, the more people want to talk about it, so in an effort to reverse this trend we are today announcing that we won’t be returning for a third season,” the statement reads. “We’re very proud of the two seasons we made and we like the way the show ended.”

According to TV blog ThrFeed, HBO execs wanted a third season, but for Bret and Jemaine — who both have families back in New Zealand — two seasons was enough. “The second series seems to me like it would be a good end to the show,” McKenzie told the New Zealand Herald in August, adding at the time that the band had “an album’s worth of beginnings of songs.”

It’s been a busy past few years for the Conchords. Along with the sitcom — which launched in 2007 — the duo has released two full-lengths on Sub Pop — 2009’s I Told You I Was Freaky and 2008’s self-titled effort — and toured the U.S.

And they’ve even found time to keep us posted on their day-to-day happenings — pie eating, beard growing — in 140 witty characters or less.

But fans of Bret and Jemaine need not worry — the guys have promised that they’re sticking around.