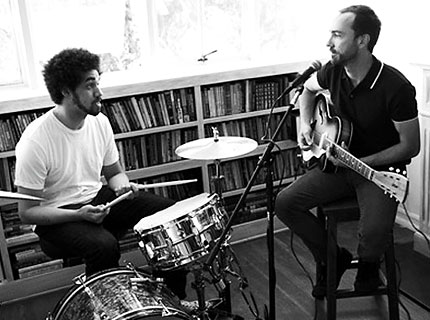 After months of rumors and weeks of veiled hints, the mysterious collaboration between the Shins’ James Mercer and uberproducer Danger Mouse is starting to see a little clarity. There’s even a first single available to download that don’t cost nothin’.

While the band’s site featured loops of ambient instrumental bits, which we could only presume were from their debut album, brokenbells.com now has a full song, leadoff track “The High Road” for no more than the cost of entering an e-mail address.

And as the teasers suggested (one of the loops was, in fact, the intro to “The High Road”), the song offers a lot more sonically than the Shins’ direct jangle; the music is at least as complex as Mercer’s famously hard-to-parse lyrics. But while the downtempo beats and bloops might be somewhat surprising to longtime Shins fans, Mercer’s distinct, syrupy vocals feel like the return of a friend — after all, it’s been three years since Wincing the Night Away.

Broken Bells’ self-titled debut is now due March 9, unless that’s some sort of trick, too.