Discover fantastic, off-the-beaten-path music that was just under the radar this year. 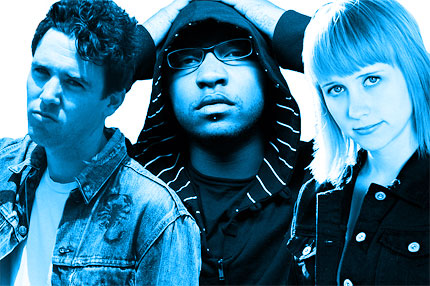 When we painstakingly compile our annual Best Albums list, there are always a few outliers, albums that we loved deeply but, for one reason or another, didn’t find a spot in the top 40. It’s music that we blasted from our cubicles, sought out at club shows, and dropped onto playlists for pals, that didn’t necessarily permeate the popular consciousness, or score career-changing syncs in car commercials. Simply put, we loved these oft-underappreciated albums — we hope you will, too.

Post your favorite under-the-radar album of 2009 in the comments section below!

This Australian girl-boy/guitar-drums duo handed Tegan and Sara a demo tape and ended up as their opening band. But An Horse’s debut album defies charges of nepotism: Kate Cooper composes taut and emotionally gripping overshares that would be the envy of any lovelorn diary-keeper, delivered atop unbelievably catchy bursts of indie-pop jangle. PETER GASTONStream: An Horse, “Postcards”

MANCHESTER ORCHESTRA
Mean Everything to Nothing

This Georgia band’s 2006 debut chronicled frontman Andy Hull’s poignant and occasionally tentative (read: wimpy) musings on faith. But Mean Everything undoes any notion that music about God can’t inhabit the form of a confident, muscular rock behemoth — or that it can’t command the rapt attention of even the staunchest agnostics. P.G.Stream: Manchester Orchestra, “Shake It Out”

Grab a tissue. This singer/songwriter’s third album is a reminder of the power of a simple, well-turned melody and heart-tugging lyric. Here, McCombs crafts stripped-down, timelessly poetic modern folk songs (by year’s end, Girls were covering “Dreams-Come-True-Girl” live) and issues wordy laments (“My Sister My Spouse”) that might seem pretentious or ponderous if they weren’t so profoundly lovely. W.G.Stream: Cass McCombs, “Dreams Come True Girl”

JACK PEÑATE
Everything Is New

While his debut’s frenetic ska-punk was catchy, this British playboy seemed like far too much of a social darling to pull off his spazzy persona. But his second full-length’s shift to a sexy, dancefloor-filling sound feels more fitting: From the brassy, panty-flinging romp “Be the One” to the Latin rhythms of “Tonight’s Today” to the lilting balladry of “Pull My Heart Away,” Peñate could be a twentysomething Tom Jones — in much looser pants. P.G.Stream: Jack Peñate, “Tonight’s Today”

If there was a Now! That’s What I Call Music for indie power pop, “Coast of Carolina” by 22-year-old Seattle native Michael Benjamin Lerner would definitely make the cut. Distorted, Big Star-style guitar chords give way to one of the year’s catchiest choruses, complete with a melodic build that would have Maria Von Trapp whistlin’ along. If you don’t like Telekinesis, your ears don’t work. W.G.Stream: Telekinesis, “I Saw Lightning”

THE WAVE PICTURES
If You Leave It Alone

Shyness and a charmingly provincial lack of ambition have kept this decade-old British trio out of the limelight. But their third album’s shyness and provincial charm is exactly what makes it so compelling. Singer/guitarist David Tattersall deserves every Jonathan Richman comparison he gets, but the album’s coy witticisms, carelessly strummed guitars, and cheeky bursts of brass never overstay their childlike welcome. P.G.Stream: The Wave Pictures, “If You Leave It Alone”