The Who to Perform at Super Bowl XLIV

The British band is set for this season's big halftime show -- but should the NFL have picked someone else? 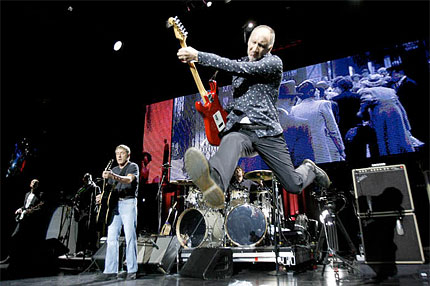 British rock legends the Who are reportedly confirmed to headline television’s biggest event of the year — the Super Bowl. According to Sports Illustrated blogger Jimmy Traina, Pete Townshend, Roger Daltrey, and the rest of the Who’s current lineup will rock the halftime show Feb. 7, 2010, at Miami’s Land Shark Stadium, although the National Football League and CBS, who’ll broadcast the game, have yet to confirm the report.

It certainly isn’t the first time an international band has starred on the biggest day annually in American sports: U2, the Rolling Stones, and Paul McCartney are all halftime show alumni — and a few of them made our list of the five most memorable Super Bowl halftime shows of all time.

But should someone else get the call? Watch ESPN’s Tony Kornheiser and Michael Wilbon debate the subject below — Tony’s vote goes for Taylor Swift, and Wilbon doesn’t even know the smallest detail about the Who — then post your comments: Who would you like to see taking the stage at the big game?

WATCH: ESPN’s Kornheiser and Wilbon debate the Who