The Australian rockers belt out four songs, including a Neil Young cover and a brand new tune! 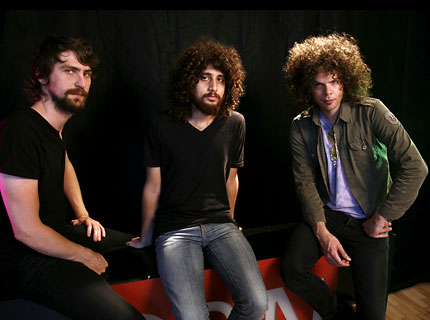 “We’re in Wolfmother and we’re here to play a couple of tunes,” said frontman Andrew Stockdale as he and his band sat down to do just that in our NYC office.

And an introduction was definitely required. Aside from Stockdale, Wolfmother’s lineup has been completely overhauled since American audiences last rocked out to the Australian band’s bluesy update of classic rock. Taking a break from gigs opening for the Killers, the band ditched their usual arsenal of electric guitars for a more serene trio of acoustic instruments.

Check out Wolfmother’s acoustic takes on “Joker and the Thief” and “Vagabond” from their debut album, a cover of Neil Young’s “Don’t Let It Bring You Down,” and “In the Morning,” a new track off the band’s forthcoming album, Cosmic Egg, due Oct. 27.