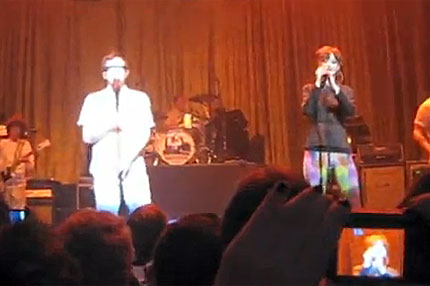 Weezer sure have a penchant for odd collaborations. They invited Gossip Girl Leighton Meester onstage during their NYC Halloween show to perform their Ratitude hit “(If You’re Wondering if I Want You To) I Want You To.”

The move comes after a string of recent Ratitude couplings, where the band has reached out to the likes of Lil Wayne and Kenny G. Check out the video below, as Cuomo and Meester trade lead vocals. The Telletubbies rocking in the crowd seem to be enjoying it.

Meester actually has a music career of her own; she released a single featuring Robin Thicke earlier this year. So maybe this live collaboration is a sign of future collaborations between the two. Hey, you never know with Weezer.

The crowd seems to be pretty into it. And after the performance, Meester tweeted, “Holy shit. @riverscuomo is perfection in a bottle.” Radical Weezer awesomeness? Or is Weester just downing the quality of a good song? Let us know what you think in the comment section below!

BONUS: Also during their visit to NYC, Weezer played a secret show at P.C. Richard & Sons Theatre, where they covered Coldplay’s “Viva La Vida” for an intimate crowd. Watch below!