The pop star sports razor-blade sunglasses, is force-fed vodka, and sets fire to a man with a gold-plated jaw. Yowsa! 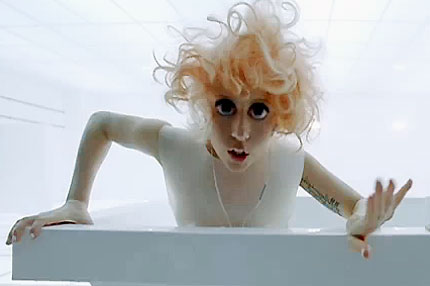 With her outlandish costumes, risqué songs, elaborate videos, and onstage antics, Lady Gaga has established herself as pop’s resident drama queen — and her new music video for “Bad Romance” is her most theatrical work yet.

The clip for the lead single off Gaga’s Nov. 23 release, The Fame Monster, hit the web today.

It kicks off with a bang and doesn’t let up. Bursting out of a white coffin, Gaga dons an array of outlandish outfits — from razor blade sunglasses to 12-inch Alexander McQeen Armadillo stilettos — all while being kidnapped, force-fed vodka, and made to dance for her male captors.

Francis Lawrence, who worked on videos for Brittney Spears and Gwen Stefani, directed the clip based on Gaga’s vision and concept. “I knew he could execute the video in a way that I could give him all my weirdest, most psychotic ideas, but it would come across to and be relevant to the public,” said Gaga told MTV News.