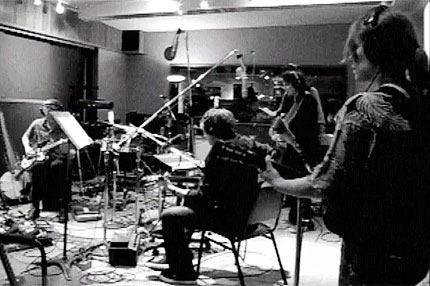 As part of his new Record Club project, Beck has recruited friends like MGMT, Devendra Banhart, and Wolfmother’s Andrew Stockdale to cover entire albums from the Velvet Underground and Leonard Cohen.

For his latest installment, he tapped Wilco, Feist, and Jamie Lidell to take on Oar, a 1969 cult favorite by onetime Moby Grape/Jefferson Airplane member Skip Spence.

Beck explained the collabo in a post to his website: “This one took place last June when Wilco was in town for the release of their new eponymous album. They came by after a long day filming a TV appearance and still managed to put down 8 songs with us.

“Recording took place at Sunset Sound Studios in the room where the Stones did a lot of Exile On Main Street (and looking at the records on the walls it appeared that the Doobie Brothers recorded most of their output there too). Sitting in on drums, we had James Gadson, who’s played on most of the Bill Withers records and on songs like ‘Express Yourself’ and ‘I Will Survive.’ Jeff Tweedy’s son Spencer played played additional drums.”

Watch the cover of “Little Hands” below. Which album should Beck and his pals cover next? Tell us in the comment section.