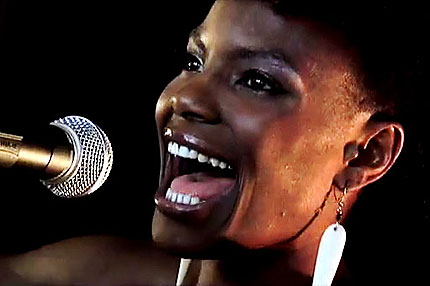 When U.K. trio Noisettes broke onto the scene in 2007, their rough-and-tumble garage rock and flamboyant frontwoman, Shingai Shoniwa, garnered favorable comparisons to Karen O and the Yeah Yeah Yeahs. But as contributor Mikael Wood observed that year in his review of their debut, What’s the Time Mr. Wolf?, Shoniwa’s “got a sensitive streak that can devastate unexpectedly.”

On Noisettes’ upcoming SPIN-lauded Wild Young Hearts (out Sept. 22), that sensitive streak is in full bloom, something we witnessed first-hand when the band stopped by the office to play three stripped-down songs.

Shoniwa’s tra-la-las on the title track, sweetly cooed doo-wop style chorus on “Never Forget You,” and impassioned diva delivery on “Atticus” all pointed to a different arc for Noisettes, one that might fill a void created by the demise of Britain’s most troubled R&B export, Amy Winehouse. At the very least, Shoniwa’s rapturous performance made for one of the most captivating sets yet in our SPIN Sessions series.

Check out all three exclusive clips below.