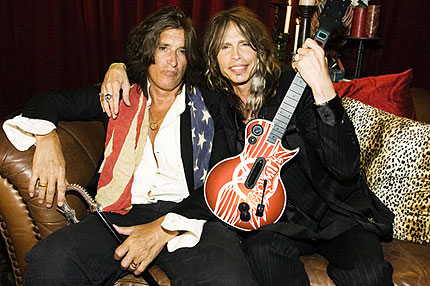 Well, that was quick. After days of speculation that frontman Steven Tyler was leaving Aerosmith after nearly 40 years behind that scarf-laden mic stand, and a nasty Twitter post from guitarist Joe Perry, it appears that all the hubbub was for naught and all is well in Camp Aerosmith.

During a set by Perry’s band, the Joe Perry Project, at New York’s Fillmore at Irving Plaza last night, Tyler appeared onstage to declare that he was remaining in Aerosmith — then offered additional proof by joining his guitarist for a romp through their classic hit, “Walk This Way.” Watch the video below!

“New York, I want you to know I’m not leaving Aerosmith,” Tyler said. “Joe Perry, you are a man of many colors, but I, motherfucker, am the rainbow!”

We may never know what prompted this brief hiccup in the Boston band’s storied history, but for now this saga appears to have ended. But should it reemerge, we stand by our nine picks for possible Steven Tyler replacements.