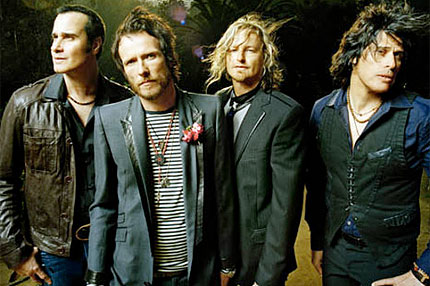 The Stone Temple Pilots have been touring nearly non-stop since their first reunion gig at Harry Houdini’s house in 2008.

But now the quartet are focusing on their reunion album, postponing the remainder of their U.S. tour to hit the studio to finish the record, “which will be coming out in the early spring of next year,” a post to the band’s website explains.

As frontman Scott Weiland told SPIN, the new songs were born out of jam sessions recorded during sound checks on the band’s reunion trek. “We brought a little Protools rig that was at the front of the house,” the rocker said. “So any little nuggets that popped out, we have on tape.”

Fans bummed about the scrapped dates shouldn’t fret — Weiland and Co. are planning an outing behind their reunion effort. “When we finish the album, there will be a big tour around its release and that will probably be a long tour,” Weiland told Spinner, speculating that the trek could last up to a year.

And that’s not all from Weiland — the rocker is planning a third solo album, too, the follow-up to 2008’s Steve Albini-produced “Happy” in Galoshes’, his first solo release in over a decade (listen to key tracks “Paralysis” and “Crash”), all while working on his new clothing line, Weiland for English Laundry.

So, dear SPIN readers, do you think STP’s new record can match the band’s 1990s glory days? Tell us what you think in the comment section!