On the Scene: Los Angeles 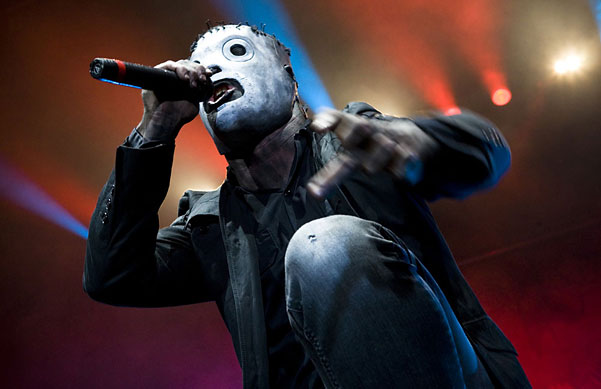 "This was a picture I wanted for a long time," says SPIN photog Erik Voake of this image, taken, like many in this gallery, at a festival run by weed-rappers Cypress Hill. "As a concert photographer, I don't always get the chance to shoot my favorite bands and I love Slipknot. So this is a really personal photo for me."

"This was a picture I wanted for a long time," says SPIN photog Erik Voake of this image, taken, like many in this gallery, at a festival run by weed-rappers Cypress Hill. "As a concert photographer, I don't always get the chance to shoot my favorite bands and I love Slipknot. So this is a really personal photo for me." 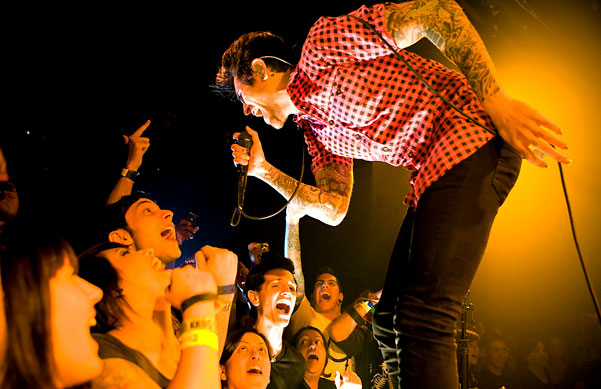 AFI played this September 29 show as part of L.A. alt-rock radio station KROQ's "Super Tuesday," which just so happened to fall on the day the band's new Crash Love came out. "You could tell how excited they were to be playing new material," says Voake, who took all the shots in this gallery. "Davey Havok was sweating all over everyone in the front row." 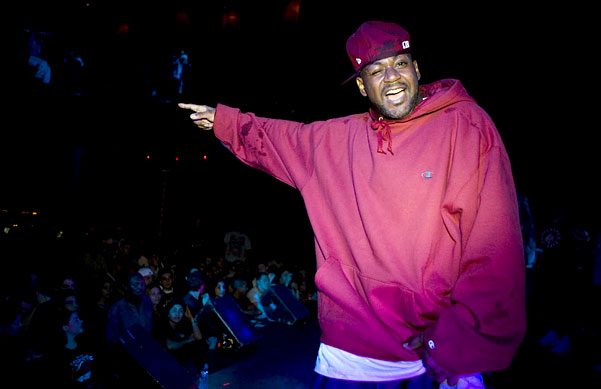 Touring in support of his recently-released R&B-inspired Ghostdini: Wizard of Poetry in Emerald City, Ghostface Killah let our lensman have free reign -- almost. "I've worked with the Wu-Tang guys for years," saws Voake, "so they let me on-stage to shoot. I just have to play by the rules." Meaning? "They get to make a scene and I don't." 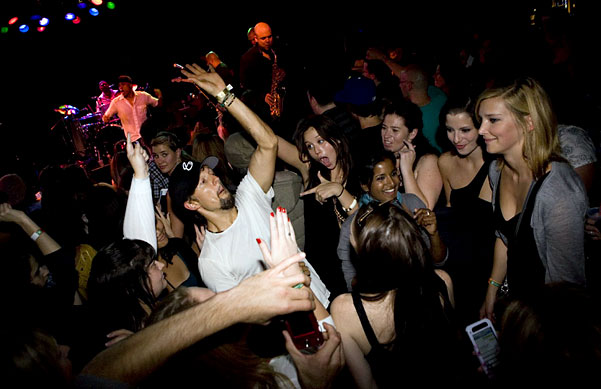 "This was taken later on in the same night that [Jason Mraz] played at the Hollywood Bowl," explains Voake. "The show at the Roxy was just billed as being by Jason's backing band, but then he showed up and did another full set. I love how this shot shows the reaction of the girls in the crowd -- they were like 'Oh my god!'" Mr. AZ is touring South America through the end of November. 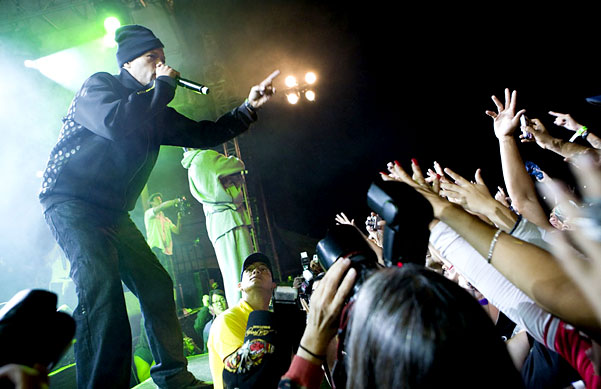 "Most rappers are hard to shoot. They never stop bouncing around," says Voake. The two Wu-Tang members seen here, though, "are a photographer's dream. Method Man especially hams it up for us. He knows we need pictures. It helps him and it helps us. The crowd loves it too." Did the crowd also, you know, live up to the festival's name? "Let's just say that the Smokeout Festival was the only cloudy place in California that day."

7.Most of System of a Down, the Roxy 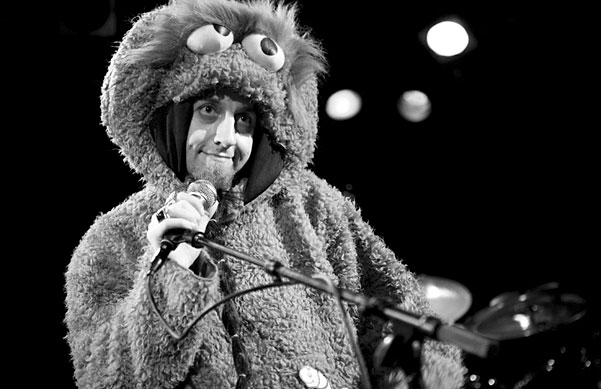 System of a Down bassist Shavo Odadjian was joined by bandmates Daron Malakian and John Dolmayan for this Halloween gig. "Actually, it was Shavoween -- Shavo was dressed as Oscar the Grouch," corrects Voake. "It wasn't a totally serious night -- I don't think the band played any System songs -- but it was fun to see the guys making music with each other." With singer Serj Tankian prepping another solo album, this show was close as fans can expect to get to seeing SOAD for the foreseeable future. 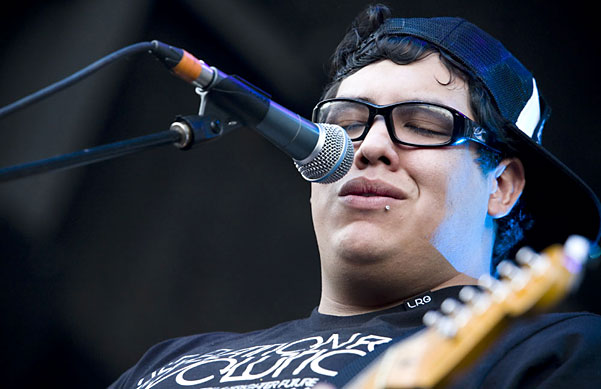 The family of late Sublime singer Bradley Nowell don't think it was Sublime playing the Smokeout -- they've threatened a lawsuit against the remaining members for reuniting under the band's name. But whatever you want to call it, the group, performing with new singer-guitarist Rome Ramirez, impressed our photographer. "It sucks that Bradley's gone," says Voake, "but it's nice to see the other guys out there playing those songs -- and the new guy did a really good job, especially considering that there must've been people in the crowd who thought he shouldn't be singing at all."

9.Dead by Sunrise, the Roxy 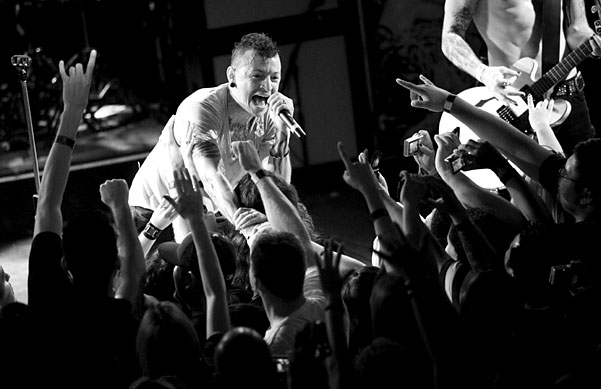 This show was the first West Coast stop for Linkin Park frontman Chester Bennington's solo project Dead by Sunrise. "They sounded like they'd been playing together for years," says Voake, who took the shot from a higher vantage point in order to show, "the crowd's reaction to Chester. The connection he makes with his fans his amazing." Dead By Sunrise's debut album, Out of Ashes was released October 13. 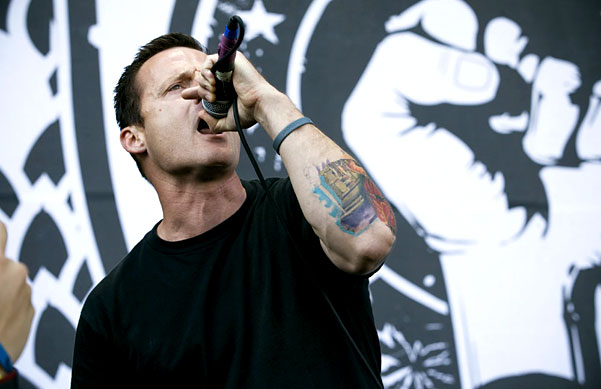 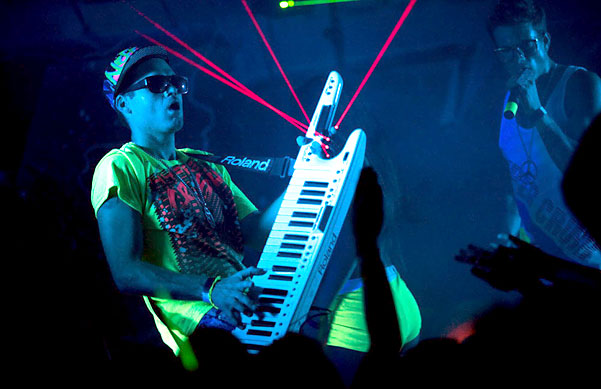 According to Voake, L.A. hip-hop trio Hyper Crush is, "straight out of the '80s, Miami Vice-style. You have to respect any band that uses lasers and a keytar." Recently signed to Universal Motown, HC is currently working on its as-yet-untitled major label debut, which is due for release in early 2010. 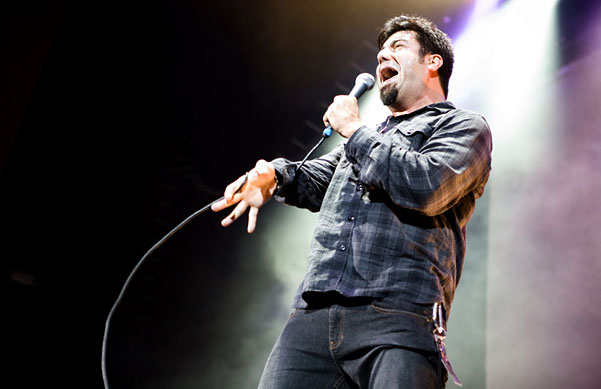 Voake had a hard time capturing the Sacramento alt-metal quintet. "I was late getting to their show because I'd just had one of my cameras broken by [SoCal punk band] the Kottonmouth Kings. By the time I got to the Deftones, I only had one song left to shoot." Hopefully he'll have better luck next time -- which shouldn't be in too long. The band's latest, Eros , is due for a February 2010 release. 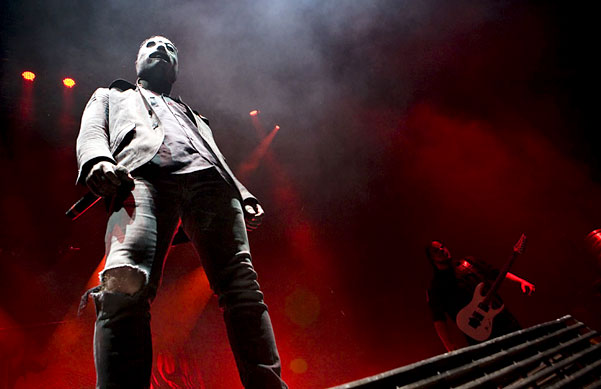 "This shot was right at beginning of the band's set," says Voake. "They hadn't even played a song yet. I love how [singer Corey Taylor] is standing in the spotlight, waiting to get started. It's a dramatic image." Our photographer has another reason for digging this shot: "Slipknot kicks ass."