Slayer guitarist Kerry King is a badass. For one thing, he, co-guitarist Jeff Hanneman, bassist-singer Tom Araya, and drummer Dave Lombardo (who rejoined the band in 2005 after a lengthy absence) helped invent thrash metal, a speedy, bludgeoning style heard to pulverizing effect on the new World Painted Blood.

For another, he wears leather pants, spiked wristbands, scowls a lot, and has a tattooed skull. Not a tattoo of a skull, but a tattoo on his skull. There’s a good chance he, or someone who looks very much like him, is who your mother is picturing on the rare and unpleasant occasions when the words “heavy metal” come to her mind.

But despite his fearsome appearance and Slayer’s even more fearsome sound, King was happy to talk about his new album, how his band compares to other legends of heavy music, and the most metal thing he’s ever done.

There’s already a lot of buzz about World Painted Blood being one of the band’s strongest albums in some time. Did you guys have the sense when you were recording and writing it that you were on to something good?
Yeah, we did. It’s hard to say why exactly, but I think there was just a really good vibe in the studio. This time, instead of bringing in songs that were pretty close to being done, Jeff and I mostly worked stuff out in the studio. So I think that might have had something to do with it. And also we’re comfortable again with Dave Lombardo being back on drums. Last time around, on Christ Illusion, we had to sort of get used to playing with him again. Not anymore. His playing is such a big part of our sound. Slayer is me, Jeff, Tom, and Dave — that’s what makes us who we are. So what you’re hearing on World Painted Blood is pure Slayer. 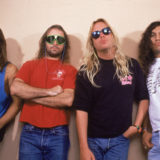 Something I’m curious about with metal bands is how, given that you work within somewhat predefined stylistic boundaries, you’re able to keep it fresh. Are there ever times when you feel like every good heavy guitar riff has already been written?
I think no matter what kind of music you play, there will be moments when you feel like it’s all been done before. It’s really a matter of just putting in the time. If you keep working, and don’t settle, you’ll eventually find something good — though I won’t sit here and tell you that every riff on every Slayer song is completely amazing and original.

So you never get the urge to bring a slow jam to a Slayer rehearsal?[Laughs] Nah, man! I guess Jeff brings in some pretty weird stuff sometimes. But I’m a metal fan. Metal is what I like listening to. Metal is what I play. When I sit down with my guitar, that’s what comes out. My brain wouldn’t even think to do something else.

When your last album, Christ Illusion, was released in 2006, it went to No. 5 on Billboard’s album chart. That was the highest charting album of the band’s career — 25 years after you guys formed. Why do you think the band has been able to grow, and not just maintain, its popularity so far into its career?
Well, chart numbers can be deceiving. An album doesn’t have to sell that much these days to show up really high on the charts. I doubt Christ Illusion sold more than [the band’s 1986 classic] Reign in Blood and I have no idea how high that charted. But I think the reason we’re still popular is that metal fans aren’t fickle like fans of other types of music. Metal is like a brotherhood. It’s not a flavor-of-the-month kind of thing. The dude who bought Reign in Blood gave it to his little brother. Then they were both into Christ Illusion — and they both bought that album because they actually care about the musicians who make the music they love.

Do you look around at other bands that have had similar long-term success and compare them to Slayer?
There’s a bit of that. But it’s hard to compare us to other bands. The obvious thing to do is to compare us to the other bands in the “Thrash Big Four,” but Anthrax has gone through so many singers that it’s not the same band it was back in the ’80s; Megadeth is it’s own thing; Metallica became a pop band and stopped being metal. We never did. There’s no one else like us.

Can I geek out for a second?
No worries.

Okay, good. So when I was a kid I used to read all the guitar magazines and I’d always see these pictures of you wearing a wristband covered in big metal spikes. I always wanted to know if it was it hard to play guitar while you were wearing that thing.
[Laughs] It’s really hard! That wristband is heavy as shit. And I can only have it on for certain songs and at certain points in the set because wearing it too long makes the tendons in my arm seize up. But you gotta give the people what they want.

Yeah. What’s the thing you’ve done that best exemplifies metal?
I had this belt made out of heavy chains — like tire chains basically. It’s pretty killer. The only thing is that when I wear it I can’t move around on stage because it’s so heavy.

I think playing guitar in Slayer is more metal than that.
That’s true. Let me change my answer: Playing in Slayer for almost thirty years is the most metal thing I’ve ever done.