Puscifer’s Tricks Are a Treat in San Diego 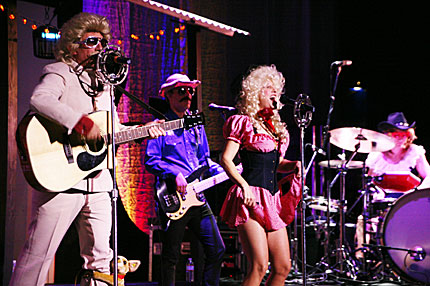 Maynard James Keenan — the freak-show ringmaster of Tool, A Perfect Circle, and Puscifer — perpetually promises to design spectacles that go well beyond what people expect from a rock show. If the costume changes, sexually explicit variety-show comedy, multimedia pieces, and elaborate sets on display at Puscifer’s Halloween night tour opener at San Diego’s Spreckels Theatre are any indication, Keenan has already made good on his word.

The performance opened with a video message from Keenan’s character, “Major Douche,” who stood in front of an American flag backdrop, admonished patrons who might record or photograph the show, then led the crowd in a rousing chant of “Vagina!”

What followed felt like an X-rated episode of Hee-Haw, starring two more characters: Keenan as bumpkin crooner Billy Dee (a polyester-clad cross between Charlie Rich and Carl Perkins) and comedian Laura Milligan as his child bride/sidekick Hildy (think sexed-up Dolly Parton). And, for added ambiance, all of this played out on a detailed set of a country-style front porch.

And that was just Act One!

When the lights came up again, the entire outfit had ditched their country garb for a more modern look, with Keenan and back-up singer Brit chanteuse Carina Round performing behind flat-screen monitors — their bodies were readily visible, but their faces were only seen on screen. The band ripped through seven album-like versions of Puscifer songs, including four from the soon-to-be-released C Is For (Please Insert Sophomoric Genitalia Reference Here) EP. And, yes, that’s the official title.

While his Billy Dee character ran at the mouth in the first act, Keenan was workmanlike in the second. Outside of a few thank-yous, he only added: “We’re here tomorrow and it’ll be different.”

After 90 minutes, the spectacle ended without an encore, but no one in the heavily costumed crowd seemed to mind — one of The Shining’s “redrum twins” exclaimed that it was one of the best concerts she’d ever seen. And that would have to make Maynard proud.

Scott Mcdonald
Tags: puscifer, We Were There