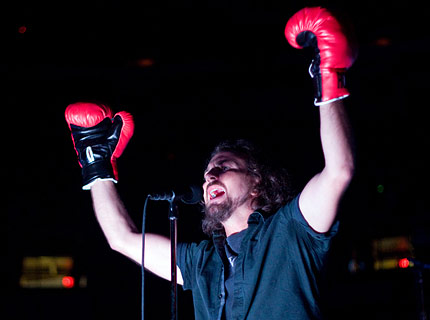 Eddie Vedder is a liar.

At the start of Pearl Jam’s four-night stand at the Philadelphia Spectrum — the last concerts ever at the historic arena, which is destined for demolition — the singer pledged to the audience, “By Saturday night we’re gonna try to play every song we know.”

So where was “Dirty Frank,” the Ten B-side about the band’s cannibalistic bus driver? Or “Soon Forget,” the anti-capitalist ukelele screed from Binaural? Or “Driftin’,” an acoustic number they released as a 1999 holiday single to fan club members? They’ve played it in concert a whopping four times; surely they must still know it, right?

But what the four epic Philly shows couldn’t deliver for absolute completists, they more than made up for in obscurity and all-around weirdness. The Internet was brimming with speculation of a Philly-style Last Waltz for the Spectrum, with everyone from Bruce Springsteen and Billy Joel (both of whom played the arena more than a dozen times) to Dave Matthews and Jon Bon Jovi rumored to show up.

None of them did, but Saturday’s three-and-a-half-hour Halloween set did include oddities — from a roadie dressed in full-body rat costume for “Rats,” to a boxing-ring girl giving periodic World Series updates (while the Phillies were winning, anyway), to “Sweet Lew,” a never-before-played-live homage to Kareem Abdul Jabbar, with Vedder dribbling a basketball into a mic.

And that’s not even counting when the band came out in full Devo attire for a complete, enthusiastic rendition of “Whip It.” Red bucket hats included.

This was a show for the devotees. Witness “Out of My Mind,” an improv played just twice in 1994, reprised here for a fan who promised a significant sum for charity if they would perform it. Or the obscure Vitalogy throwaway track “Bugs,” never played live before, a musical curiosity that features Vedder talking about joining the world of insects while he accompanies himself on the accordion. The Last Waltz, this ain’t; more like The Last Polka.

It might not have been what the assembled faithful were expecting, but they ate it all up anyway.

Whether blasting through their greatest hits (“Jeremy,” “Alive,” “Evenflow”) or 20-year-old rarities (“Crown of Thorns,” by Pearl Jam precursor Mother Love Bone), this band knows as well as anyone how to rile up its audience. Vedder lets them sing on “Better Man” and “Corduroy,” while “Spin the Black Circle” and “Do the Evolution” he keeps for himself. Even a brand-new song like the anthemic “Amongst the Waves” — on Pearl Jam’s latest album, out just a few weeks — had the crowd fist-pumping the air like the band was winning them the World Series. (Someone in South Philadelphia had to; it surely wasn’t happening across the street at Citizens Bank Park, where the Phillies were losing Game 3 to the Yankees.)

By the end of the night, with the house lights up and the band tearing through Neil Young’s “Rockin’ in the Free World,” Vedder was tossing out to the fans a seemingly endless supply of tambourines, like he was hosting the world’s loudest bar mitzvah.

As the Spectrum’s final chords rang out (for the record, they came in the form of “Yellow Ledbetter”), and confetti and balloons blanketed the arena for the last time (hey, at least no one had to clean it all up, right?), it was clear that, through the saving grace of rock’n’roll, all lies were forgiven.

Why Go
Last Exit
Corduroy
Severed Hand
The Fixer
Elderly Woman Behind the Counter in a Small Town
You Are
Amongst the Waves
Evenflow
Pilate
Unthought Known
Daughter/It’s Okay/Another Brick in the Wall, Part II
Johnny Guitar
Rats
I’m Open
I Got Id
Glorified G
Out of My Mind
Black
Insignificance
Life Wasted

Jeffrey Barg
Tags: pearl jam, We Were There