With a slick backing band, Jones offers further evidence that her new album may be her coolest yet. 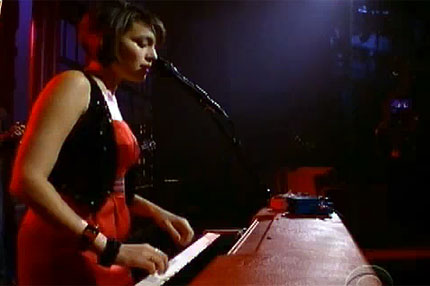 Her latest album, The Fall, isn’t out until next week, but Norah Jones offered a sneak peek at its sexy soul sound with her performance of lead single “Chasing Pirates” on Letterman last night. Watch the video below!

Buoyed by tantalizing Wurlitzer notes, a subdued but air-tight backing ensemble, and Jones’ satiny coo, “Chasing Pirates” was a winner — especially for Letterman himself, who pined quite unabashedly about Jones’ talents. And yes, stuff like that totally sounds awkward since news of his intraoffice debauchery surfaced earlier this year.

Check out the video and tell us what you think of Norah’s new single.