MYTH No. 5: Marilyn Manson Is A Puppy-Killing Nazi

REALITY: Maybe we should let him explain... 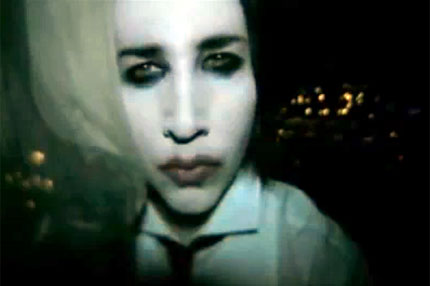 REALITY: Maybe we should let him explain…

Manson goes on the record:

“Some people think I’m one of the rock stars who had surgery so I could suck my own dick. Quite honestly, I WOULD NOT WANT TO SUCK MY DICK.

It’s been in a lot of dirty places. The Christian Coalition said I was throwing puppies and cocaine into the audience and demanding they kill the dogs and do the drugs, when, in fact, I’VE NEVER HURT AN ANIMAL AND I DON’T GIVE AWAY DRUGS FOR FREE.

“There’s also that thing about me being from Mr. Belvedere. I never even saw that show. I hope the real actor is using that rumor to get laid [see below]. I’ve heard I’m a Nazi and that I was grown in a petri dish.

THE TRUTH IS BIGGER: I’ve snorted sea monkeys. I’ve snorted mud. I could tell you sexual misadventures that would have you reaching for the lotion. But the scariest possible thing about me is that I HAVE MORE KILLS ON MY RECORD THAN ANYBODY.

“In the last ten years, I’ve been blamed for more school violence than anyone. More than Ozzy or Judas Priest. I find out about the murders that don’t get noticed by the national press because I’m associated with all of them. It’s strange — MARILYN MANSON IS A VILLAIN CREATED BY PEOPLE WHO NEED HIM TO EXIST IN ORDER TO EXPLAIN THE PROBLEMS THEY’RE RESPONSIBLE FOR.

“[A woman’s muffled screams are audible in the background] Did you hear that? I can start another legend right now. I’M THE ROCK NESS MONSTER. I’M THE BOGEYMAN.“– MARILYN MANSON (as told to David Marchese)