MYTH No. 3: Lady Gaga Is All Style, No Substance

REALITY: Lady Gaga's bizarre getups only distract from the fact that she's a brilliant songwriter. 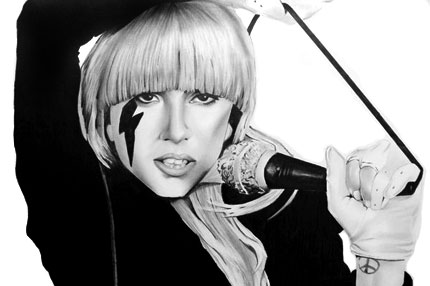 REALITY: Lady Gaga’s bizarre getups only distract from the fact that she’s a brilliant songwriter.

Lady Gaga’s purportedly transgressive persona — wearing doilies over her head in lieu of pants, possibly having a secret penis — relentlessly dares you to despise her, and it’s no surprise so many have taken the bait.

The press focuses on her performance-art shtick in lieu of her songs, so even though The Fame has been one of 2009’s biggest-selling albums, nobody seems to have pointed out that it’s also one of the best.

Partly it’s the sound — an unabashedly bonkers, rubbery synth-loop boogie that manages to sell back 35 years of esoteric Eurotrash as something unmistakably in-your-face and American, without ever branding itself as retro. If you’re tuned in to them, blatantly uncool references abound: Ace of Base’s Swedish reggae, Aqua’s Danish Barbie twirl, Boney M.’s Teutonic West Indies world disco; her single “Paparazzi” has the ominous minor-key fragility of ’80s Italo-pop.

Gaga ropes in distorted rhythms from KMFDM sprocket-rock to Peaches electroclash. But she also croons a cascading Latin freestyle ballad called “Brown Eyes,” heartfelt enough to be Lisa Lisa in 1987.

And in her flirtiest tracks, “Boys Boys Boys” and “Summerboy,” she’s a California girl on Echo Beach, bopping along to Blondie in her new-wave bikini.

All of which would already be wonderful if Gaga’s songwriting wasn’t just as inventive. But on The Fame, she leaves no doubt that word games are as much her idea of a good time as love games. “Poker Face” extends a gambling metaphor through several verses as cleverly as any country outlaw. Over the hard thump of “Just Dance,” a celebratory night out implodes into fright and confusion in ways so mundane it’s a shock no lyricist thought to detail them before: A boozed-up girl misplaces her keys and phone, turns her shirt inside out, forgets what club she’s in and what song is playing.

Gaga’s most inescapable obsession albumwide, though, is kinky sex, which she’s sane enough to depict as not so much decadent as funny. And through it all, she’s tossing off nonsense syllables and phrasing pirouettes and juvenile side chants and martial Marine grunts and cherry-cherry-boom-booms just to throw you off balance, preferably without losing her own footing. If you play along with her bag of tricks and disco sticks, accept her pretensions as a new twist on club music’s costumed tradition, and refuse to be blindsided by her backstory, it’s as delirious a dance as you’ve witnessed all year.

Agree?Disagree? Tell us what you think below!