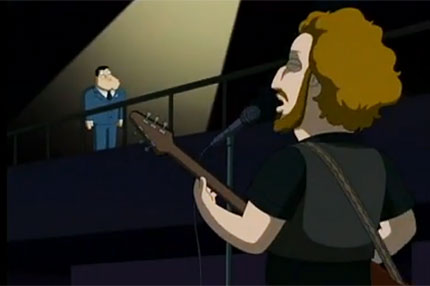 In last night’s episode of Fox’s animated hit American Dad, heartless CIA agent Stan Smith is transformed into a My Morning Jacket fanatic who worships frontman Jim James. The MMJ-soundtracked episode was side-splitting — check out the video below!

After Stan’s life-changing concert experience (“[Jim James] makes Enya sound like a Russian couple arguing at the bowling alley,” he muses), he becomes an obsessed superfan overnight, creating an MMJ worship room in his house. Later, in a tripped-out fantasy, Stan flies through the universe with James riding on his back as Evil Urges’ “Touch Me I’m Going to Scream Pt. 2″ plays in the background.

Stan then decides to follow MMJ on tour in a parody of Cameron Crowe’s rock journo flick Almost Famous, with Stan dressed as teenage scribe William Miller and Roger, Stan’s alien houseguest, vamping it up as a groupie. “Name is Abbey. Abbey Road,” says Roger, with midriff bared and Daisy Duke shorts riding low. “And when it snows, I need to be plowed.”

Check out a clip of Stan’s love-at-first sight moment with Jim James here, and click here to watch the full episode on Hulu.