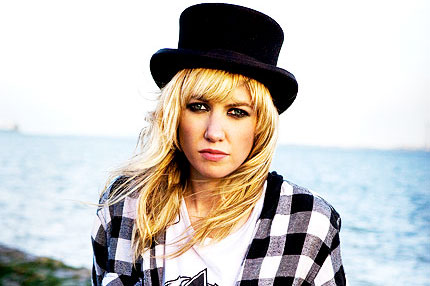 When he’s not commandeering the stage as the boisterous bassist for SoCal punks Blink-182, Tweeting wisdom to more than 1.4 million followers, or handling album production duties for bands like Motion City Soundtrack and New Found Glory, you’d think Mark Hoppus would turn down the music.

In our new series, Hopp on Pop, Hoppus is sharing his favorite up-and-coming acts, culled from his incessant pursuit of all that rocks. (Click here to discover Mark’s previous picks: Canadian rock duo Japandroids and NYC popsters fun.) Check out his third entry below, and come back to SPIN.com next Wednesday for Mark’s next musical revelation.

WHERE HOPP HEARD HER FIRST:
“She was actually introduced to me by a friend of mine who works with her. He just said, ‘Check this out.’ There was no explanation of what it was about, but I listened to it and thought it was really cool.”

WHY SHE ROCKS:
“She’s a retro pop-rock, catchy, synthy guitarist. It’s pretty rad that she plays all the instruments and does all the programming on the record. I think that’s really amazing and a great talent to have. “