The former Smiths axeman blends in perfectly with the pub-punk band. 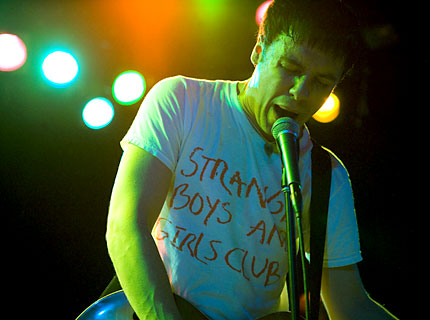 Legendary Smiths guitarist Johnny Marr took time out from his gig playing in Modest Mouse to join the Cribs at the Roxy in West Hollywood on Monday for the first American date of the U.K. group’s new tour.

Heavy on material from the Cribs’ just-released, Marr-abetted album, Ignore the Ignorant, the pounding 18-song set showed the pub-punk band in a whole new light as terms like “cameo” and even “collaboration” lost all relevance. Here was a quartet of fully integrated band members, singing and playing as if all four had been working together for years.

Alternating between itchy, pinprick leads and gently shimmering vibrato chords, Marr shined on the raucous set opener, “We Were Aborted,” but it was his vocal work on the next track that really stuck out. Joining singer-guitarist Ryan Jarman and singer-bassist Gary Jarman at the mic, Marr sang along to the chorus of the 2005 track “Hey Scenesters!” sounding like the twin frontmen’s long-lost triplet.

From that point on, the famed guitarist appeared to be just another bandmate, a respectful partner content to channel his signature sparkle-and-swirl fretwork into the nooks and crannies left by guitarist Gary Jarman’s driving rhythms. In fact, when it came time for the evening’s lone guitar solo, it was Jarman who stole the show with a mock homage to the venue’s heavy metal origins.

“We’re playing the Roxy on the Sunset Strip so by way of dedication, I’d like to do this!” Jarman explained matter-of-factly before tapping out a series of intentionally hammy notes a la Van Halen.

With the band’s new lineup established and the characteristically cheeky camaraderie obviously still intact, the band settled into a frothy, sweaty stride on new songs like “Hari Kari” — a rare example of the band’s political side that featured Gary and Ryan seemingly taking on both suicide and abortion rights with the lyric “It’s your mind, it’s your voice. It’s your body, it’s your choice.”

And though there were some bumps along the way — Ryan’s out of tune guitars on “Men’s Needs,” Gary’s strained singing on “Cheat on Me” — the Cribs came off with twice the energy displayed on the albums.

It wasn’t until the final song of the night, the swirling, confounding “City of Bugs,” however, that the band really showcased their secret weapon, finally unleashing Marr in a torrential outpouring of spacey, six-string reverberations.

It wasn’t quite “How Soon is Now?” But it was no disappointment.

Liam Gowing
Tags: Johnny Marr, the cribs, We Were There