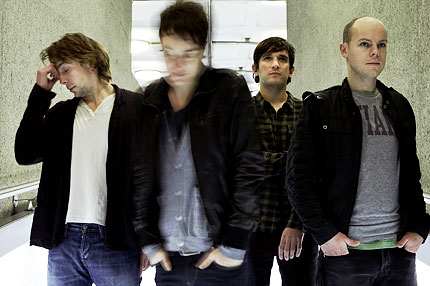 Oasis might be finished, but fans of epic Britpop need not fret. The earnest if slightly melancholy British arena pop of South London newcomers Animal Kingdom has the grandiose aspirations of Snow Patrol and Coldplay, tinged with the edgy swagger of ’90s bands like Gay Dad and Mansun.

On top of entrancing dual guitar lines on “Two by Two,” a cut off their debut album Signs and Wonders (just released digitally in the U.S.), frontman Richard Sauberlich’s androgynous crooning chronicles a re-imagined version of Noah’s Ark, where humans, not subjects of the, ahem, animal kingdom, are spared from divine wrath.

“I found an old children’s illustrated Bible … with these great pictures of the animals going into the ark,” Sauberlich tells SPIN.com. “I’d also found an old copy of The Naked Ape by Desmond Morris in a second hand bookshop in Camden market, and the two kind of grew into this tune.”

Stream the track and tell us whether it would make it onto your musical ark, or if it shouldn’t escape the flood.