And so do loads of Portland, OR, residents in the band's "Watching the Planets." 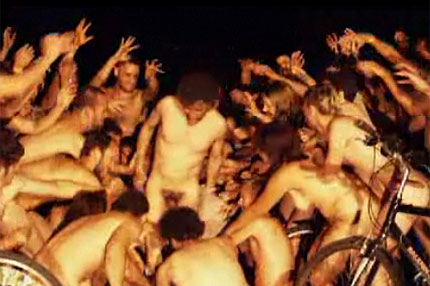 The Flaming Lips are a weird bunch.

But with their latest release, the “Miles Davis meets Joy Division” double album Embryonic, the Oklahoma boys are getting even weirder, with ringleader Wayne Coyne going naked and filming a giant, spherical vagina-type-thing giving birth to a bunch of other naked people, who then ride bicycles and dance around a forest like googly-eyed, peyote-fueled Burning Man attendees.

Yep, that’s exactly what you get in the video for the dark and pulsating psychedelic banger “Watching the Planets.” That, and a lot of jiggling junk.

The clip was filmed outside Portland, OR, and was co-directed by Coyne and George Salisbury, the guy behind the Lips’ trippy Christmas on Mars movie. But it’s not the first time Coyne rocked his birthday suit for the camera. During the cover shoot for SPIN’s October issue, the 48-year-old frontman stripped down for photographer Francesco Carrozzini.

See the “Watching the Planets” video here, and watch footage from SPIN’s photo shoot below. So what do you think of Mr. Coyne in the buff? Hot… or not? Tell us in the comment section.

WATCH: On The Set With The Flaming Lips