New music videos have leaked from each embattled star -- but which one reigns supreme? You decide. 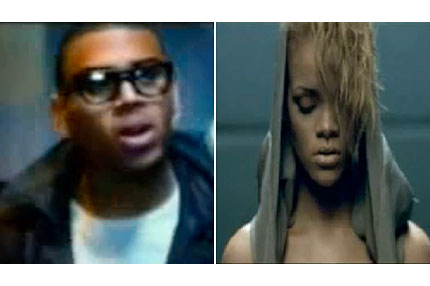 The lives of Chris Brown and Rihanna continue to run on parallel tracks: Nine months after their now-infamous Grammy night incident, both singers have new albums on the horizon, and videos from each surfaced over the weekend.

But who’s got the better clip?

In Brown’s video for “Crawl,” the singer dances in the desert and pines over a lost love, played by a sexy, tall woman — no, she doesn’t have a short haircut, but one could say that she looks a little bit too much like Rihanna.

Rihanna’s clip for “Russian Roulette” employs the dark cinematography of recent Bond movies, and depicts the singer being held captive (in the sexiest prison duds you’ve ever seen) and psychologically tortured by an unknown military force.

Whose video will make the bigger splash? Chris Brown’s weepy love song or Rihanna’s sinister and dark tale? Watch both below, then sound off in the comments or vote in our poll.