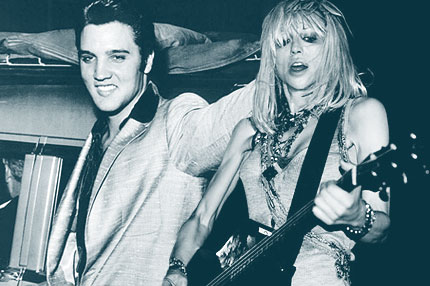 Courtney Love bids $120,000 in an auction to win a date with former president Bill Clinton. Sadly, she loses… to Condoleezza Rice. [NYMag]

KISS want to rock with you in the afterlife, and Electric Six want to help with your next orgasm — as evidenced in the list of Most Ridiculous Band Merch Ever. [Mog]

Led Zeppelin’s “Stairway to Heaven” only became popular because it was long enough for DJs to take cigarette breaks. Wayne and Garth disagree. [Spinner]

Ever wonder why John Mayer is such an awesome dancer? He explains: “If you are a man in life and you haven’t gone to a gay bar, you haven’t really danced.” [YouTube]