Find out why the 76-year-old innovator matters right now! 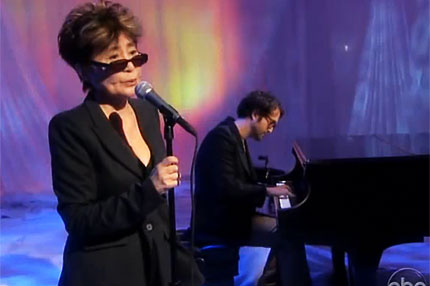 SPIN issued Yoko Ono’s new album, Between My Head and the Sky, an impressive eight-out-of-ten-star review, calling it the “heaviest avant-pop from a 76-year-old mainstream pariah/underground innovator,” which “picks up where hubby John left off with 1980’s “Walking on Thin Ice.”

Wednesday, Ono and her son Sean Lennon dropped by The View to perform album gem “I’m Going Away Smiling.” Watch video below.

Between My Head and the Sky is credited to the Plastic Ono Band, which Ono and John Lennon formed in the 1970s. For the album, the longtime New Yorker recruited a handful of jazz vets and her son’s pals for help, including Tokyo art-rocker Cornelius and ex-Cibo Matto keyboardist Yuka Honda.

The eccentric cast lends itself to the album, which shifts from electronic noise grooves to piano ballads. “I’m Going Away Smiling” is the latter: a touching jazz-piano song of survival proving that the women blamed for breaking up the Beatles still has plenty of artistic class.