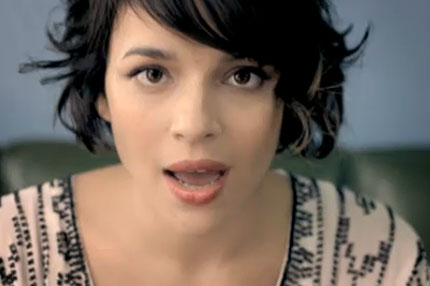 With Norah Jones’ new album, The Fall (out Nov. 17), your mom’s favorite piano crooner has transformed into a steamy soul-and-rock-singer with help from Ryan Adams, who lends a hand with songwriting, and Kings of Leon producer Jacquire King.

The music video for the album’s first track, “Chasing Pirates,” makes Jones a sailor chasing pirates down the avenues of New York City!

Over a Wurlitzer riff courtesy of Roots/Erykah Badu sideman James Poyser, Jones references old maritime maps, plots her course with a periscope, and sails her apartment building down the avenue. “My mind is racing from chasing pirates / and I don’t know how to slow it down,” she croons. Jones recruited director Rich Lee, the dude behind the effects for the Pirates Of The Carribean, to create the stunning visuals!

Watch Jones’ video for “Chasing Pirates,” then tell us what you think in the comments section below.