Get a taste of the grunge icons' Live at Reading DVD, and the new Lennon biopic, Nowhere Boy. 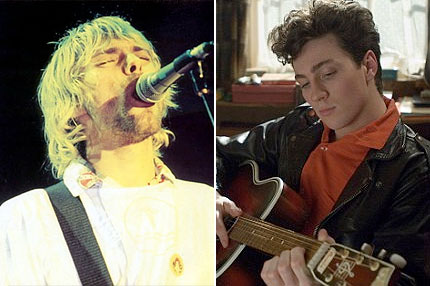 Michael Jackson isn’t the only deceased musical icon who’s having a big week.

Kurt Cobain and John Lennon are back on screens, too, each with a new cinematic endeavor set for release in the coming days — and trailers for both projects are now available (watch below).

The long-awaited Nirvana DVD, Live at Reading, which features their entire performance from the 1992 Reading Festival in England — a set captured at the peak of their popularity, and widely considered to be among the band’s best ever — hits stores Nov. 3, and also airs in its entirety Nov. 2 on Fuse.

We previously posted a clip from the DVD, of Cobain and Co. blazing through Bleach’s “School,” and now we’ve got the official trailer below.

From the Beatles universe comes Nowhere Boy, a new John Lennon biopic that premieres tonight at the London Film Festival. Stewarded by first-time director Sam Taylor-Wood, the film chronicles Lennon’s childhood in Liverpool, his initial encounters with his future Beatles bandmates, and his unusual and dramatic relationship with his mother, Julia. It’s based on Imagine This: Growing Up with My Brother John Lennon, a memoir by his half-sister, Julia Baird.

Tell us what you think of both projects below!