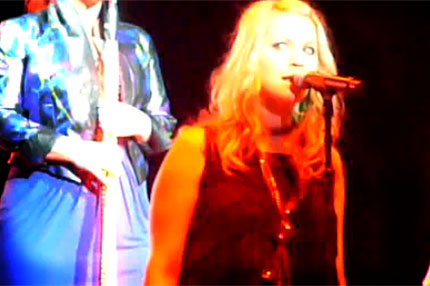 If “Since U Been Gone” didn’t win you over, maybe this will: Tuesday night in New York City, on the third stop of her 35-date “All I Ever Wanted Tour” U.S. tour, teen-pop sensation Kelly Clarkson covered the White Stripes, Kings of Leon, Alanis Morissette, and the Black Keys! Watch video below.

“I really love music. I like all kinds,” she told a sold-out crowd of 2,500 at Manhattan’s Hammerstein Ballroom [via MTV], after ripping through Jack and Meg’s “Seven Nation Army.” During the 20-song set she also let loose a soulful rendition of the Keys’ rocker “Lies,” and mashed the Jagged Little Pill songstress’ “That I Would Be Good” with the Kings’ mega hit “Use Somebody.”

With an 11-piece backing band — including a horn section, three singers, and a turntablist, among others — Clarkson also ran through originals like “Breakaway,” “All I Ever Wanted,” “Cry,” and “Never Again,” from her 2007 release My December. Fans sang along on songs like “My Life Would Suck Without You,” the first single off latest album All I Ever Wanted, and cross-over sensation “Since U Been Gone.”

Watch video ofClarkson covering the White Stripes, Kings of Leon, Black Keys, and Alanis Morissette — plus rocking “Since U Been Gone.” Love her? Hate her? Tell us what you think in comment section.

Clarkson “Since U Been Gone”