PLUS: Rapper N'fa, a longtime pal of the late Dark Knight actor, talks about Ledger's concept for his "Cause An Effect" clip. 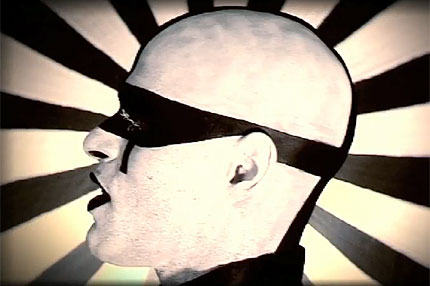 In the years before Heath Ledger’s untimely death in January 2008, the Dark Knight actor was becoming more and more entwined with music: directing a video for Modest Mouse, covering Nick Drake for a new release, and acting alongside Tom Waits in his final movie, Imaginarium of Doctor Parnassus. He had yet another musical venture in the works, too: a video for “Cause An Effect,” a song by Aussie rapper and longtime friend, N’fa. Watch below.

What’s more, N’fa recently posted a making-of video to his MySpace page, in which he talks about working with Ledger. “We shot it in Sydney… and he called me at this crazy hour, saying, ‘I’ve got this idea, let’s make a video!'” explains N’fa (short for No Fixed Abode). “We found a few different ideas for clothing, a massive sheet and black curtain, and got in touch with two really good makeup artists… and shot it all in his garage.

“The idea was to keep it really artistic. Heath was basically running around directing the shots… it was a really cool day.”

The clip was produced by the Masses — a film and music company that Ledger was a partner in — and debuted at the 2009 Rome Film Festival.

“Every day I count my blessings that he directed this piece of art,” the rapper says. “It was a song I was proud to have written but I never expected to have such an immense video made for it. I’d known Heath since we were very young and he was always a creative kind of guy and, in many ways, ahead of the curve.”

WATCH: N’fa’s “Cause An Effect” video, directed by Ledger:

WATCH: Making of the “Cause An Effect” video: