Ben Gibbard! Shirtless R-Patz! Bella! Check out the clip of "Meet Me on the Equinox" from New Moon. 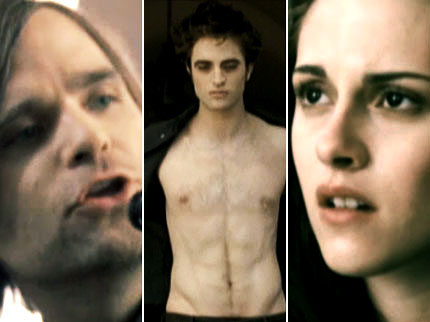 They’ve been a chart-topping band for the past few years, but Death Cab for Cutie’s new video for “Meet Me on the Equinox,” the lead single from the star-studded soundtrack to Twlight sequel New Moon, is their most unabashed stab at pop crossover yet.

Did we mention there’s also a slow-mo shot of a half-naked Robert Pattinson? Yeah, this is weird.

Performing in an austere-looking rural living room — which has a slight feel of a set that 3 Doors Down might employ for a power ballad video — the Seattle-based quartet rock out very seriously on a song that manages to maintain the Death Cab pedigree of emotionally involved but never sappy rock’n’roll. “Let me lay beside you darling, let me be your man,” sings Ben Gibbard. “And let our bodies intertwine but always understand that everything ends.”

The idea that “everything ends” is prevalent throughout the clip: Daylight — the mortal enemy of vampires — shifts about Death Cab’s little practice space. Then, a sequence of scenes from the film culminates with Kristen Stewart’s Bella running towards Pattinson’s vampire character, Edward, as he emerges nearly shirtless from an old gothic-looking building, about to take a suicidal step into the midday sun. Drama!

Watch the video below. Is it all sorts of blood-sucking awesome? Or does it just bite? Post your comments.

WATCH: Death Cab for Cutie, “Meet Me on the Equinox”