Merge founders Mac McCaughan and Laura Ballance also read from Our Noise, a new book about the seminal label. 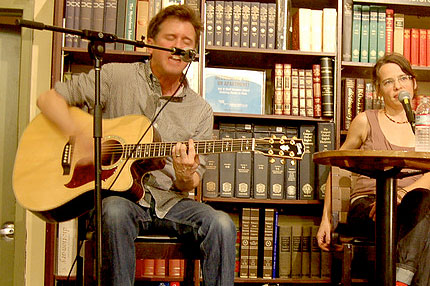 DIY icons Mac McCaughan and Laura Ballance of Superchunk dropped by New York City’s Housing Works Bookstore Friday for a reading from Our Noise: The Story of Merge Records, the Indie Label that Got Big and Stayed Small, a new oral history about their revered 20-year-old label.

And Mac surprised the packed, 250-person crowd with a special treat: a short set of acoustic tunes — including covers of Merge artists Spoon and Magnetic Fields! Watch video of the performances below.

Mac’s five-song set was book ended with Superchunk originals “Detroit Has A Skyline,” off of 1995’s Here’s Where the Strings Come In, and “Throwing Things,” from 1991’s No Pocky for Kitty. But, like an Oreo, the middle contained all the extra yummy stuff: Covers of Spoon’s “Anything You Want,” off of the 2001 album Girls Can Tell; a rendition of “Where’s Your Patience, Dear?” off of the 2000 album Golden Days Before They End from Matt Suggs, an obscure Merge artist formerly of 90s indie pop duo Butterglory; and a version of Magnetic Fields’ “Come Back from San Francisco,” off their acclaimed 1999 concept album 69 Love Songs.

“There might be a Magnetic Field in attendance,” Mac joked, eyeing pianist/drummer/singer Claudia Gonson. “Sorry!”

With walls stacked full of worn novels and the floor packed with diehard Super nerds, the show offered New Yorkers an old-school retreat from the city’s CMJ madness.

Between songs, Mac and Laura read passages from Our Noise and answered fan questions. (Did Husker Du’s music get worse when they signed to a major label? Would lo-fi 1990s rockers the Rock*A*Teens have blown up, had they formed this year? According to Laura: Yes and yes.) And, in an extra special treat to the devoted crowd, Mac explained that the new Superchunk album would be ready “within a year.”

Laura and Mac also dished details on dealing with the explosive music scene in 1991, when punk and grunge broke into the charts, and every A&R rep was aiming to sign the next Nirvana. Laura likened the label interest then to the indie breakout surrounding Merge’s release of Arcade Fire’s Funeral in 2004.

Our Noise, in stores now, was penned by Gawker Media scribe John Cook, who fell for Superchunk at a 1994 concert in Madison, Wisconsin. It features an introduction by Ryan Adams, and chronicles the growth of Merge through behind-the-scenes stories of Arcade Fire, Spoon, Magnetic Fields, Superchunk, and more, and features never-before-seen band photos, handwritten lyrics, posters and other exclusive media.

Below, watch videos of Mac rocking out at HousingWorks, and tell us what you think in the comments section!

Jenn Pelly
Tags: superchunk, We Were There