Watch the trailer for the punk band's record-breaking foray into theatre! 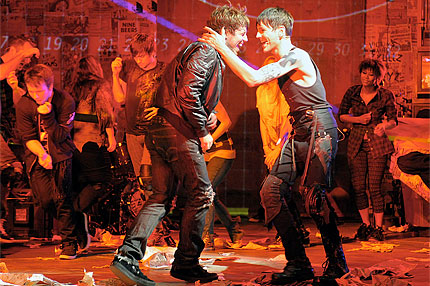 Green Day: Aficionados of fire and helicopters, high-powered machine guns, and … the fine art of theatre. As you may recall, a new musical based on the band’s 2004 concept album American Idiot opened this September at Berkeley, CA’s Repertory Theater. So what are you missing? Watch the trailer below!

The production’s script was co-written by Green Day frontman Billie Joe Armstrong and Tony Award-winning Spring Awakening director Michael Mayer, and — as the trailer connotes — it closely adheres to the album’s concept: a sonic melodrama following Ritalin-addled anti-hero protagonist Jesus of Suburbia and his pals, St. Jimmy and Whatsername.

The trailer shows the crew of spiky-haired teenagers dancing around, carousing, and dealing with the realities of their lives as presented in the album: the war in the Middle East (“Wake Me Up When September Ends”) and the paranoia of post-9/11 America (“American Idiot”).

The play is already becoming a hit. Due to popular demand, its initial five-week run was doubled, with the show closing Nov. 15, 10 weeks after its debut. According to the Los Angeles Times, the American Idiot play has broken all of the 41-year-old company’s box office records, and now holds the Berkeley Repertory Theater’s records for top gross, biggest advance sale, and biggest single-day box office receipts!

And Green Day isn’t stopping there: Armstrong is planning to take American Idiot to the silver screen!

But what’s in store for the band’s latest album, 21st Century Breakdown? No word just yet — but it would work perfect as an opera!