Assembled from choice parts of My Morning Jacket, Bright Eyes, and She & Him, Monsters of Folk go on a quiet rampage. 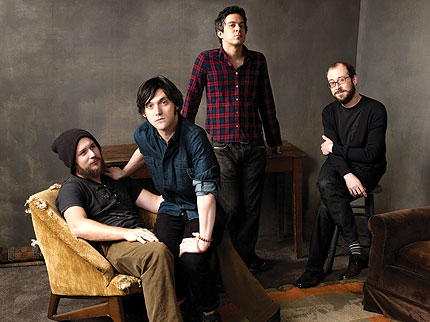 The term “supergroup” tends to get thrown around a lot, but often the tag just doesn’t sit right. Consider Damn Yankees. Or Zwan. Or more recently, Chickenfoot. While these groups technically fit the definition — a band whose members are already famous from having performed individually or in other groups — does anyone truly believe that they’re super?

But Monsters of Folk — the new band featuring Jim James of My Morning Jacket, Conor Oberst and Mike Mogis of Bright Eyes, and indie darling M. Ward — is exactly the sort of outfit for which the S-word was coined. Just don’t tell them that. “Calling us a supergroup seems so presumptuous,” laughs James, sitting in a grungy hotel room in lower Manhattan on a sofa next to his bandmates. “But if we’re described as a super group, two words, I guess that makes sense.”

Admit it — you formed this band with the express purpose of blowing the minds of SPIN readers.
OBERST: [Laughs] In fact, we did talk about that.
James: That was the first thing we talked about.

The only way it could be more perfect is if a member of the Yeah Yeah Yeahs was involved.
WARD: Or Jack and Meg White.

Exactly. Would you let other indie-rock luminaries into the group if they asked nicely?
JAMES: That’ll probably start happening more and more, so we should have an application process. Like Target. “Just go online and fill out this easy application. We’ll let you know in a couple weeks.”

Hilarious. You started discussing the possibility of doing an album together while on your 2004 tour, An Evening With: Bright Eyes, Jim James, and M. Ward. Was the project always going to be called Monsters of Folk?
OBERST: We definitely tried to come up with other names once the record was being made. But everything sounded forced. We’d been referring to it that way for so long that, you know, it just stuck.
JAMES: Yeah, and all the animal band names were taken.

What were some of the alternatives you considered?
JAMES: Monster Suffolk was an option. Suffolk, like [New York’s] Suffolk County.
OBERST: Right, because there was already a band called Monsters of Folk.
JAMES: They weren’t a band, though — watch your mouth. They were just a group of dudes who went on tour in, like, 1998 or something and called it Monsters of Folk. What they didn’t know, though, is that we were going to do this in 2009. So they, in effect, stole the name from us before it happened. We were nice about it. Didn’t take any legal action.

Who came up with the name?
JAMES: I think it was our tour manager.
WARD: I feel like it was in an e-mail somewhere. We should probably research it. But maybe it’s going to remain in the annals of mystery forever.
JAMES: Yeah. It’s an enigma wrapped in a mystery all tied up in a ribbon and stuffed in the anus of rock history.

Are you worried that using “folk” in the name might pigeonhole you?
WARD: I think we see the word “folk” in maybe a larger definition of the word than a dude with an acoustic guitar.
MOGIS: Yeah, I just think of it as “people.” We’re Monsters of People!
JAMES: We called it that because the tour was pretty acoustic. That’s where it all got started. But it doesn’t matter. People are going to misconstrue anything you do, pretty much no matter what you call it or what it sounds like. I mean, you could call the band Time Cube and people would be, “This shit sounds horrible!” and another person would be like, “I like Time Cube!”

At the end of their 2004 tour, the foursome committed to getting together to record. But a multitude of ventures involving Oberst, 29, Mogis, 35, and Ward, 35, along with the breakout success of My Morning Jacket’s Evil Urges, protracted the process. “And, yeah,” says Oberst, “we procrastinated.” Eventually, James, 31, and Ward flew from Louisville, Kentucky, and Portland, Oregon, respectively, to Omaha, Nebraska, in February 2008 for two weeks of recording at Mogis’ in-home studio (“I’m the Ringo,” jokes the Bright Eyes guitarist-producer, who also happens to be Oberst’s neighbor), but expectations going in were low. “It was like, ‘Let’s just mess around,’ ” says Mogis. “There wasn’t really a plan.” But they emerged with the foundations of the 15 diverse tracks that make up their self-titled debut album, finishing it off in Malibu in May.

Were the sessions truly collaborative?
WARD: We all came in with two or three songs initially. But we wanted each other’s input. That was one of the pleasures of the record — opening the door to each other’s involvement, rather than going into the studio and preprogramming everything.

Did you compromise your other projects by bringing in your songs and using them on this record?
JAMES: Not at all. When I wrote the songs that would end up being on this, I was also writing songs for My Morning Jacket. Songs just fall out, and I start putting them in categories. There are songs that come out where I’m instantly like, “This would be ideal for My Morning Jacket.” And then there are other ones that are a question mark. Besides, the guys in My Morning Jacket are all really ego-less. We’ve made it a rule that we can all do whatever we want when we’re not doing the band.

Read the entire Monsters of Folk story in the October 2009 issue of SPIN, on newsstands now.