The musician debuts his high-end sneaks at a NYC party! 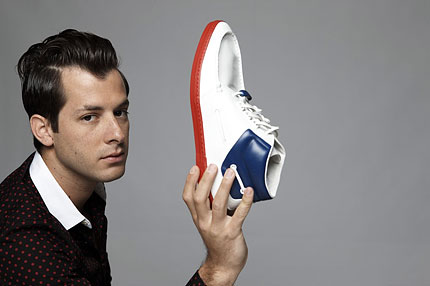 DJ and super-producer Mark Ronson has teamed up with luxury giant Gucci to design four types of Gucci Ronson sneakers that will be sold exclusively through traveling pop-up shops and a new Gucci iPhone app.

The first design in Ronson’s line debuted Saturday night at a party at the Gucci Icon-Temporary store at 43 Crosby Street in New York City. The guest list included Mary J, Blige and Wyclef Jean. The pop-up sneaker store will stay open for two weeks before the collection moves on to Miami for Art Basel in December, and then on to London and Tokyo.

The stores are selling 18 exclusive sneaker styles – 16 for men and two for women — plus Ronson’s designs. Featuring classic Gucci elements such as the GG logo and a stylized version of the Gucci red-and-green web detail, each shoe has an embroidered “Limited Edition” label inside and a silver or gold metal dog tag hanging from the laces. Leather tags on shoe laces can be customized and embossed with a shopper’s initials. Icon-Temporary sneakers are priced from $500 to $1,400, and Gucci Ronson shoes are $500 to $600.

“I spent many, many years as an avid sneaker collector, so I wanted to make sure these Gucci shoes were truly special from an aesthetic and collectable point of view,” said Ronson, who produced a 12-inch vinyl record of limited edition tracks that will be given to customers who buy Gucci Ronson. Check out three cuts from the 12-inch below.

If you can’t visit one of the planned pop-up stores, you can check out the new shoes on the Gucci iphone app.