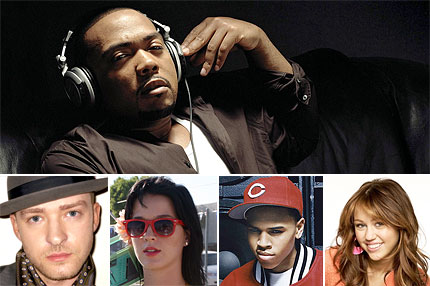 Some sequels are openly clamored for by the public. New Moon, perhaps. Others are totally mystifying — Wrong Turn 3, anyone? Falling somewhere in between is the upcoming Shock Value 2, Timbaland’s star-studded follow-up to his equally star-studded 2007 solo album.

Tim’s own value may have dipped a bit of late, thanks in no small part to big-league bombs like the Chris Cornell solo album he produced, but he can still bring in the A-list talent: Justin Timberlake (of course), Miley Cyrus, Chris Brown, and Katy Perry are among the visiting luminaries on the disc, due November 24. Ooh, and hey, look! Jet!

However, the first single, “Morning After Dark” eschews boldfaced names for a new one. Tat-covered French songstress (and signee to Timbaland’s Mosely Music) SoShy trades verses with an Auto-Tuned Timbaland and sings the hook. It’s not exactly the most high-wattage way to introduce the album, but what do you think? Check out the track at Ryan Seacrest’s site and post your comments below.