The Flaming Lips Are in Complete Control

From their low-fi, high-energy traveling circus to their cockroach like longevity to the hand-lettering of these very words, Wayne Coyne and the Flaming Lips are in complete control of everything they touch. 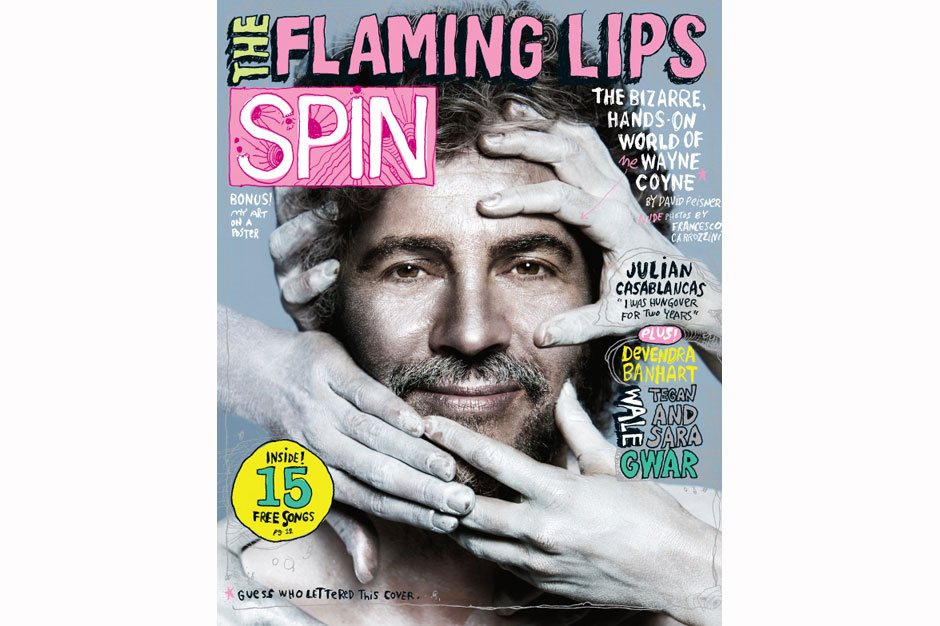 During the spring of 1994, while the Flaming Lips were barnstorming across America, convincing radio programmers and their own label that a brain-fryingly weird pop tune, “She Don’t Use Jelly,” from their album Transmissions From the Satellite Heart, could be a hit, I was engaged in a middle-class rite of passage, backpacking across Europe. Drawn by equally healthy doses of American Jewish guilt and morbid curiosity, I spent a chilly afternoon touring Terezín, a former Nazi concentration camp 40 minutes outside Prague where more than 30,000 Jews died.

This was all obviously upsetting, but the one detail I recall most clearly is the sign that adorned the entrance: Arbeit macht frei. Translated literally, it means “Work makes free.” It was, of course, just insidious propaganda — hard work wasn’t going to save anyone there — but the phrase, disturbingly, stuck with me. After all, the idea that working your ass off could lead to freedom — if not the physical kind, then financial, intellectual, or spiritual — is an idea worth believing in and one that feels, in a way, quintessentially American.

“This unit controls our video stuff,” Coyne tells me. “We’ve got this huge LED screen, but we’ve been having problems with the brightness.” He walks to the front of the stage, then looks back at the screen and shouts in Shane’s direction: “Take the contrast all the way down, then up again.” Coyne hops off the stage and backpedals a few paces. Orange and yellow hues pulsate from the screen. “If that’s looking bad, that actually looks pretty awesome.”

Coyne is wearing gray striped pants and a weathered polo-style shirt over his thin frame. His curly mane of dark gray hair and a scraggly salt-and-pepper beard give him the regal bearing of a Shakespearean king, but his tendency toward perpetual motion veers closer to Woody Allen. When I tell him the story about my trip to Terezín and the words over the camp gate, he laughs at the implicit comparison between the Lips and the Nazis, then warms to the idea.

“That is a great slogan,” he concedes. “And it definitely does apply to my life. I don’t know if work makes you free, but if you’re willing to take chances, follow your convictions, or any of that bullshit, you can be happy.”

Coyne presides over the crew here like a genial site supervisor, mostly wandering around ensuring everything is functioning, but quick to get his hands dirty should a problem arise. He and Ivins, the Lips’ only other original member, usually arrive at the venue between eight and ten on the morning of a show. While the Lips travel with a nine-person road crew, there is almost no aspect of the tour Coyne isn’t involved in or couldn’t do himself if he had enough hands.

“The idea that you just make the music and some guys set up all your stuff — that works great for Thom Yorke,” Coyne says. “But for me, everything we do up there is about us. From the dumb carpet we stand on to the video. I’d just be too frazzled if I wasn’t up there making sure all these little things go right.”

Since the band’s beginnings back in Oklahoma City in the early ’80s, he and Ivins have kept things exceedingly DIY. Coyne has designed most of the album art. His wife Michelle does the band’s photos. His nephew Dennis used to be a member of the road crew and now fronts his own Lips-ish band (with two other ex-roadies), called Stardeath and White Dwarfs, who happen to be one of the opening acts on this tour. In fact, the earliest version of today’s temperamental video rig was built by Coyne in his backyard. Shane climbs down off it, carrying needle-nose pliers, which he later explains to me are used to open and close the LED screen door at the beginning of the show. (“It’s made for soldering, but, y’know, necessity is the mother of invention.”)

I am also introduced to, among other jury-rigged gizmos, the balloon inflator Coyne fashioned from a leaf blower and a plastic bottle spout (see sidebar). Coyne is a big fan of duct tape — he spends about $10,000 annually on it. “Duct tape and failure have shown us the way,” he says.

If Coyne is the crew’s foreman, Ivins sees himself as just another grunt. With his bald pate, groomed beard, and small, intense bespectacled eyes, he looks more like a tenured physics professor than a rock star, yet seemingly longs to be a roadie. (“One day there’s going to be a headline,” jokes Drozd. “MICHAEL IVINS QUITS FLAMING LIPS TO JOIN FLAMING LIPS ROAD CREW.”)

Tonight’s gig is one of a handful of summer dates the Lips are playing across the U.S., part promotional jaunt in anticipation of their 12th studio album, Embryonic, part victory lap celebrating the band’s unlikely success over the past decade. Combined, their last three albums have sold more than a million copies and their live show has become rock’s must-see equivalent of a three-ring circus. Coyne likes to credit the success largely to “dumb luck” — his attempt at humility is admirable, but it’s also bullshit. He’s built a modest empire (“We’ve made millions,” he admits, “but it’s not about that”) performing tasks other artists might consider beneath them.

“I know if I’m going to give it my energy and time, we’re going to climb the mountain,” he says, typically discursively. “We may get to the top of the mountain, discover it’s a fucking volcano, and fall in, but whatever it is we’re trying to do, we’re going to be able to do it.”

A few hours later, the amphitheater is nearly full, and the opening bands have finished their sets. Drozd, Ivins, Scurlock, and touring guitarist-percussionist Derek Brown plug in and tune their instruments in full view of the crowd. It’s a weird anti-spectacle: Watching the Lips tune up – not to mention hearing Coyne explain to the crowd that he’s going to come out into the audience in his famous plastic space bubble, so they need to be ready to hold him up — seems as though it’ll render their grand entrance anticlimactic.

But as Coyne puts it, “I’ve always viewed this as part of the show. You’re gonna see us set up our stuff, see exactly how this works. You are gonna know that this is not magic. And yet, when the music stars, it’s still gonna destroy you.”

Around 9:30, the band retreats for a few seconds to the side of the stage. The lights go down and two groups of volunteer dancers culled from the audience are led, dressed in white Yeti costumes, to the front of the stage. While a silhouette of a lithe, nubile woman dances on the screen behind their equipment, Drozd, Ivins, and Scurlock climb atop some road cases behind the video rig and then, once the screen has focused on the woman’s crotch, enter one by one through a door in the screen, as if they’re emerging from a birth canal.

Once they’ve taken their places onstage, the spotlight focuses on Coyne inside his bubble. Now dressed in a well- worn light gray suit, pink button-down, and un-fastened maroon bow tie, Coyne steps into the audience and is met by spastic camera flashes. When he returns to the stage and wriggles from the bubble, the band launches into the aching, triumphant “Race for the Prize,” and the crew begins firing off confetti cannons and tossing dozens of large balloons into the crowd. A few rows in from the stage, a small, blond boy of about four, perched on his father’s shoulders, points at the balloons and squeals with delight.

The circus has begun.

Read the entire Flaming Lips cover story in the Nov. 2009 issue of SPIN, on newsstands now.